The good and the bad side of Bulgarian money 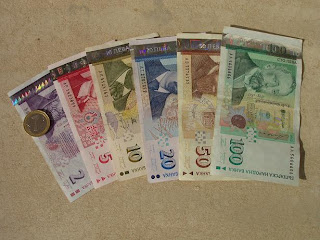 Bulgarian money (image copied from here). At the bottom of the photo, i.e. the right sides of the bills, you can see the figures for recognition by the blind - circles, triangles and rectangles.

Current US dollars can be recognized by vision only. However, as Monique Garcia wrote in Chicago Tribune on May 21, "A ruling Tuesday by a federal appeals court in Washington may change all that. The judges found that because different denominations of paper money are indistinguishable by touch, the government is discriminating against blind people. The decision could force the Treasury Department to make significant changes to currency, such as printing different-sized bills for different amounts or giving them raised markings."

The news, plus a link to Garcia's article, was reported by a member of autism-disability forum AutAdvo. This started a discussion about how bank-notes (bills) could be made distinguishable to the blind. I wrote, "Our bills of higher nominals already have signs for the blind. They are circles and triangles about 3 mm big and slightly protruding." In fact, as you can see in the above image, even the smallest bill of 2 leva (EUR 1) is marked by figures, in this case two rectangles. I was mistaken because I don't rely on the raised marking to recognize bills. When holding a bill, I can only sense that this place of it is different; I hope that blind people with their trained touch can really sense the figures.

This money story makes me proud of my country (which doesn't happen often at all). We have surpassed much more developed and civilized nations. Watch us, Americans, and learn from us!

However, there is a sad moment in my delight, because I remember a night radio program in late 1996 or early 1997. The radio host had invited the representative of the International Monetary Fund for Bulgaria - an unusually high-ranking guest for a program broadcasted live between 12 PM and 4 AM. The host asked him whether he would advise Bulgarians to trust their currency and if so, what arguments he would use. The IMF man replied jokingly, "Yes, I would tell Bulgarians to like their money, because it is very beautiful!"

This dialogue, taking place in the most surreal hours of the night, quite fitted the surreal situation in Bulgaria at that time. We were suffering hyperinflation of the type usually observed after a world war. Upon receiving my salary, I thought what I could do to prevent it being eaten away by inflation and decided to buy paper for the printer at my workplace. (Of course my employer had to buy this paper, but Bulgarian university teachers are forced to finance their work with their meager wages.) So I went to the bookstore just to discover that a package of print paper costed a little more than 3 my monthly salaries. At the maximum of hyperinflation, my salary had thawed to the equivalent of $ 4, and $ 0.6 of it was actually held as income tax.

The next government, after quashing the hyperinflation, made a monetary reform. The beautiful bills to which the IMF representative was referring were replaced by new ones, also beautiful, and with raised marking for the blind. So far so good.

However, poverty remained chronic in Bulgaria and ordinary people were trained to think that there is nothing wrong if their incomes increase at a slower rate than inflation. Now, analysts are warning us to prepare for a new surge of inflation, based on increase of fuel and food prices.

But at least we have better money than the Americans.

Most Bulgarian bloggers who are worth reading write under their true identities. An exception is the right-wing political blog Realpolitik, by anonymous author(s).
My previous post was dedicated to the death of Georgi Stoev, a writer who exposed the organized crime in present-day Bulgaria. Realpolitik also has a post on the subject, written on the very day of his death (Apr. 7) and titled They murdered Georgi Stoev for the sake of us all. Below, I'm translating several lines of it:
"Our analysis: Georgi Stoev was shot dead by the Monterey Ring, this is obvious. There was no way for them to let him talk all over the place that Lyuben Gotsev is capo di tutti capi and an old friend of the Margin. There was no way for them to let him testify against Madzho... On Realpolitik, we have been writing about the Monterey Ring for a long time. When we started the blog, we had a discussion whether to reveal our names. The opinion not to show them on the site prevailed because we didn't want to be entangled in made-up lawsuits. The story of Georgi Stoev showed the existence of dangers far more serious than a made-up lawsuit. In Bulgaria, they already assasinate writers in order to shut them up."
Posted by Maya M at 3:45 AM 1 comment:

The death of Georgi Stoev