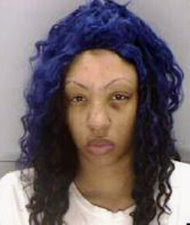 Let me first copy an Associated Press report from today:

"SC police: Mother won't tell them where son is
by Meg Kinnard
COLUMBIA, S.C. (AP) — It's unknown how long investigators would have gone without any information on a missing 18-month-old South Carolina boy if his mother hadn't crashed her car Christmas Eve.
Twenty-two-year-old Zinah Jennings and her son, Amir, were reported missing by the boy's grandmother, who hadn't seen either of them since Thanksgiving.
The mother didn't turn up until police responding to the single-vehicle accident learned she was listed as a missing person.
She's now in jail, charged with lying to authorities about where the boy is, prompting a search by local, state and federal authorities spanning the Carolinas, Georgia and beyond.
Columbia Police Chief Randy Scott says Jennings immediately began giving conflicting statements about where the boy was."

This disappearance of a toddler, unreported by the single mother, finally reported by the grandmother, after which the mother started endless lying, immediately brings to mind an earlier similar case - of 2-year-old Caylee Anthony. After Caylee's skeletal remains were found in a swamp, jurors let themselves be persuaded by defence that her mother Casey Anthony was not guilty of murder, manslaughter and child abuse.

At the Frontpage Magazine's symposium on Casey Anthony verdict last year, blogger Rob Taylor was furious: "The idea of “solid proof” is a myth. A child is dead and her mother avoided reporting her disappearance, then tried to frame someone else. Before juries were populated with armchair forensics experts this would have been an open and shut case... The disregard many people have for the victim, for Justice in the philosophical sense and for the truth is what troubles me here. The legal system worked – Anthony had a fair trial in front of a jury of her peers. That doesn’t mean Justice has been served. Caylee Anthony was thrown out like garbage, found with duct tape on her remains. We all know why people duct tape the mouths of children shut. We know why some drugged out party girl doesn’t report her child missing... The connection between who we give our sympathy to and cultural decline is clear. You can pretend that... there’s some reasonable explanation for not reporting your child missing or even that you truly believe that it’s necessary to let guilty people go free to ensure that innocent people aren’t imprisoned. What you cannot pretend is that there aren’t consequences to your pretense, one of which is the corpse of a Caylee Anthony."

Exactly. Commenting the case in my Sept. 6, 2011 post Unreasonable doubt, I wrote, "Seeing Casey Anthony acquitted and commentators praising the verdict as a victory for the US justice system, other people may be tempted to emulate her." I fear that this is what has happened in South Carolina, and while I wish very much for little Amir to be found alive after all, I have little hope that his grandmother will ever hug him again. We'll see what will follow and whether Zinah Jennings will be let, like Casey Anthony, to step over her child and continue her life as a free woman.
Posted by Maya M at 2:51 AM No comments: 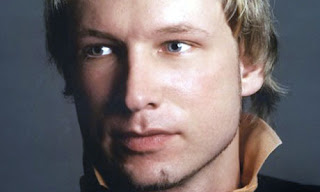 
On July 22, 2011 Anders Behring Breivik, the nice-looking young Norwegian pictured above, detonated a bomb in the center of Oslo, killing eight people. Then, while the capital was in horror and dismay, he sailed to the nearby island of Utoya, where Norwegian socialists organized a youth camp. Dressed as a policeman and heavily armed, he shot in cold blood at the defenceless, mainly young people, killing 69 people. The youngest victim was a girl named Sharidyn Svebakk-Boehn who had just turned 14. She had a blog where the last entry is dated July 20, 2011 - two days before her death.

Breivik was motivated by his Islamophobic and anti-multiculturalist views. For me, it meant that the perpetrator of a most horrific mass murder had views very similar to mine. I admit it created an eerie and uneasy feeling in me, and inevitably led to some soul-searching. I discussed my thoughts on Rose-Anne's post The Look of Crazy. It was not very suitable for this purpose because verbal abuse was guaranteed, but I simply wished to discuss it, and Rose-Anne was the only blogger known to me who wrote a meaningful post on the subject.

Two months later, the 10th anniversary of Sept. 11 attacks overshadowed this more recent massacre. And now - sad to say but true - the Norway victims seem all but forgotten. Most people seem to think that in the current situation, we'll have some Breiviks and we have to accept this, period. Just hope that you and your loved ones won't be around a Breivik when he detonates, because, as Rose-Anne correctly stated, usually there is no way to recognize such a psychopath before he has exposed his lethality.

What about his views? I think the observations of Breivik and his description of the current situation in Western Europe are quite true. What is wrong is his proposed solution, his choice of action. And we must admit that every time when we confront a danger associated with human beings, some of us may wish to solve the problem by exterminating these human beings. In the 1970s, some people fought communism by rounding up thousands of suspected communists to a stadium, torturing and killing many of them. In the 1940s, some sought to defeat Nazism and prevent its relapse by ethnically cleansing millions of Germans, sending mothers with babies out at Celsium -20 just because they happened to be German. And in the 17th century, other people tried to fight plague by locking victims inside their houses. All this is inhumane and utterly unacceptable, yet it does not mean that communism or nazism are acceptable, either, or that plague adds beautiful diversity to human population and so should be embraced despite its tendency to kill people here and there. I'd also point out to anyone else worried by the similarity of his views to Breivik's that we are actually comparing our sincere, unmoderated views to a highly moderated version of Breivik's views, because he took much care not to look as right-wing extremist in order not to attract attention by authorities.

From the moment when I heard that Breivik was captured alive, I was worried by the inadequacy of the punishment he could receive under Norwegian law. The maximum prison term in Norway is 21 years, and the treatment of prisoners is reportedly quite benign. The idea is that the criminal is not a source of evil but a poor person who needs help to reform and become a good member of society, rather than punishment. Like every system of morality and justice centered not on actual and potential victims but on the perpetrator, this shows its charlatanism to full degree when confronting a murderous psychopath like Breivik. During the discussion at Rose-Anne's blog, I wrote, "I may be barbarian... but I am glad that Bin Laden was shot dead, and I wish the same had happened to Breivik. We already have more of his oratory than any reasonable person would want. Now, he will have a due process in a country having humane prisons and no death penalty. He will smile from the bar in the faces of victims' parents, adding insult to injury. Yes, it is a principle that everyone is entitled to a fair trial... but he gave no fair trial - no trial of any kind - to the kids he murdered."

People, however, have found a way around this problem. In late November, Breivik was psychiatrically evaluated and declared insane. Factually, this is 100% wrong. Breivik is a very intelligent person who planned his actions with great deliberation and self-possession. He bought a farm for the sole purpose to be able to buy nitrate fertilizer needed for the bomb without arousing suspicions. (Other wannabe terrorists who hadn't the resources or far-sightedness to pose as farmers have been arrested soon after buying fertilizer, e.g. two young men of Arab Muslim origin detained in Berlin on Sept. 8, 2011.) However, from a not-so-formal point of view I think the psychiatrists did the right thing. No trial to be used as a tribune by Breivik, no smiling in the faces of victims' mothers, no release (I hope) after a decade or two. The very tissue of what we call our life depends on putting thick walls between ourselves and creatures like this murderer, although we can do it only after it is too late.
Posted by Maya M at 4:52 PM 2 comments: