Brief history of the Islamic State

Half a year ago, the Islamic State was unknown to the general public. Now, it wins battles, takes control over large territories in Iraq and Syria, terrorizes residents, subjects religious minorities to genocide and posts on the Web decapitation videos of captive Western journalists. But how did it start? It is my conviction that the Islamic State, like its predecessor Al-Qaeda, is state-sponsored in one way or another. It is hardly a chance that it originated in the realm of the bloody Syrian dictator Bashar Assad, who, like his friend and protector Vladimir Putin, won a license to do any atrocities with impunity by crossing the Western "red line" slowly and gradually. Assad systematically wiped out all opposition except the bloodthirsty psychopathic fanatics of the Islamic State in order to present himself as an acceptable ruler, better than the alternative. The following cartoon by Iranian artist Mana Neyestani (now living in France) says it all: 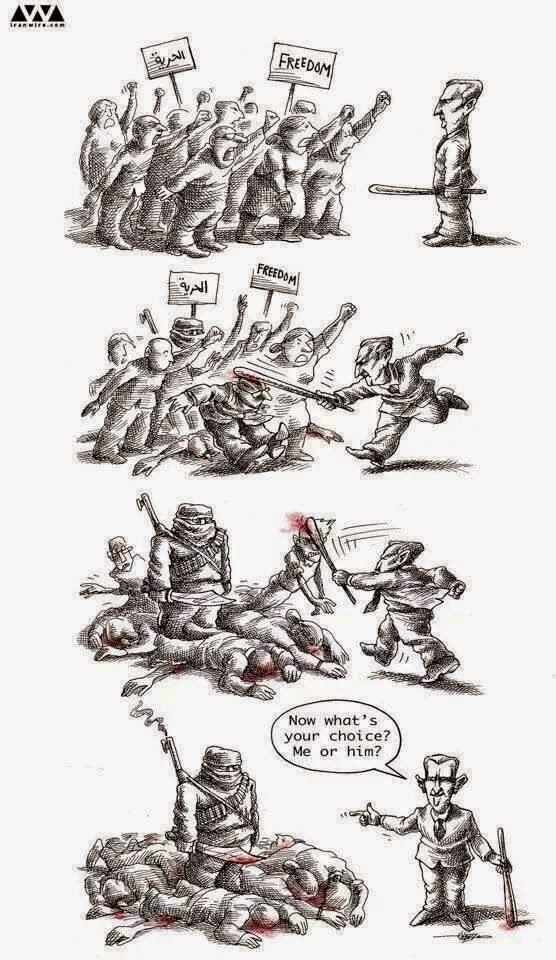 I copied it from Vox and find it an accurate if brief history of the Islamic State.
Posted by Maya M at 2:00 PM 4 comments: