The fateful line for the West

In recent time, I have been blogging exclusively about Bulgarian and personal matters, neglecting international affairs (except the most vital ones such as shoe-throwing). Let me now just translate a small section of the article Ukraine - the fateful line for the West, by Vadim Belotserkovsky. It was published in last week's issue of Pro & Anti and is available online here. The author is a former Russian dissident, now human rights activist.
"What is most important here, and what I think must be said in a loud voice, is that Europe - and, in a broader sense, the West - is now standing at the fateful line. It is marked by the wars between Russia and Georgia, between Israel and Hamas and between Russia and Ukraine (the latter one is just a gas war, yet). In front of this line, the West must decide: How far are democratic countries allowed to go in appeasing the destroyers of the world? For how long may democracies apply double standards in their approach to big and small countries, to aggressors and their victims? What more is needed for Western politicians and nations to realize with whom they are dealing?"
Posted by Maya M at 10:41 PM 2 comments: 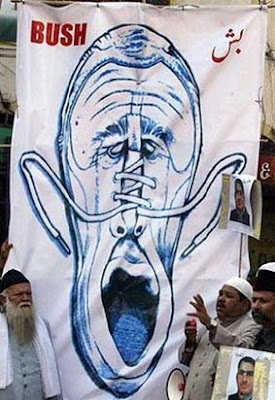 Cartoon of a shoe with George Bush's face on it, apparently shown at a rally in support of al-Zaidi. Authors of the cartoon and the photo are unknown to me.

I prefer "cyclosome" to "anaphase-promoting complex"

I have spent much of the recent weeks updating and preparing for publication my texts about the cell division cycle.
The original version was written in January and early February 1997, so I had the gloomy feeling of having done too little for too long time that is natural for anyone resuming a 12 year old project. It was made only stronger by another similarity: early 1997 was also marked by anti-government protests. Every afternoon I was leaving work to join the rally beginning at 4 PM in front of the Palace of Culture, conveniently close to my workplace. After the end of the demonstration, by about 6 PM, I was returning to resume work. I was single, so my evenings were free from other duties. The current protests against the government led by the Socialists (like the one 12 years ago) make me feel like trapped in a circle, though this time I have left the struggle to others.
Nevertheless, the work is now finished and uploaded. The original text is now divided in two chapters devoted, respectively, to the cell cycle in purely descriptive terms and to its control. And here I want to touch a question regarding the terminology used to describe the cell cycle, though I am no expert in this field.
One of the key components of cell cycle engine is a multisubunit enzyme called anaphase-promoting complex or cyclosome. The former name is used far more often and is usually abbreviated to APC. However, I prefer the name "cyclosome" and would appeal to colleagues to use it more often, if possible.
As Orwell noted, modern language is plagued by abbreviations. They are especially popular in science, possibly because preoccupation of scientists with their objects often leads to neglecting the language used to describe these objects. Still, some linguistic sense can be traced because most of the abbreviations are composed of three letters. It is clear that we shall never get rid of the basic ones such as DNA, RNA, ATP and so on. But why not make an effort towards their non-proliferation? I was glad to see such good new-coined terms as "condensin", "cohesin", "securin", "separase", "geminin". All of them came across as I was refreshing my cell cycle knowledge, and the first two (to my delight) will partially replace the abbreviation SMC (structural maintenance of chromosomes) which I admit I always confuse with MCM (mini-chromosome maintenance), another group of proteins needed for cell cycle progression. Isn't it enough that in this subject we already are forever stuck with CDC (cell division cycle) and CDK (cyclin-dependent kinase), both abbreviations relating to multiple proteins? Not to mention that an important Cdk is, for historical reasons, known as MPF (maturation-, mitosis- or M-phase-promoting factor).
Besides, there is a finite number of three-letter abbreviations, so the problem of disambiguation soon appears. Years ago, searching PubMed for the enzyme nitric oxide synthase (abbr. NOS), I obtained also many entries about Not Otherwise Specified (NOS) carcinomas. And, coming back to the cyclosome/anaphase-promoting complex, there already is one important abbreviation APC in life sciences - Antigen-Presenting Cell, a term too fundamental for any freshman to go without.
Posted by Maya M at 2:08 PM No comments:

Our local school is closed

My elder son is now 5 years old, so 1st grade is within seeing distance and I am already collecting information about schools. In Bulgaria, parents are allowed to choose which public school their child will attend (as long as there are vacant places in the chosen school).
My friends with schoolchildren enrolled them in schools with high requirements. However, their children were not only with above-average intelligence but also very disciplined. The situation with my son is different because of his hyperlexia. He was a late talker and still is more than a year behind his peers in speech. Worse, he rejects the very concept of discipline. As said his classmate, "he doesn't obey at all, never follows orders". So a school with high requirements would hardly be suitable for him. On the contrary, we need a tolerant school where difficult children are not regarded as things to get rid of.
I first thought of our local school, Primary School No. 110. Indeed, our district of Zaharna Fabrika (Sugar Factory) is mixed, so we could expect some Gypsy students. Most of my friends would never consider educating their children together with Gypsy ones, because this automatically lowers the quality of teaching (and if some opponent here objects and starts talking about racism, I would kindly ask him to bring his head out of the sand). However, I would not be bothered if my son has Gypsy classmates, as long as they don't bully him. This is not because I am less racist than my friends but because my son anyway learns what he is willing and ready to learn, rather than what he is taught, so the classroom environment isn't as important for him as it is for other children.
However, as soon as I found the school building (a rather nice one, with noble dark-red colour), I heard that it has been closed, most likely forever. My city of Sofia has so few schools that all of them work in two shifts, so the news of closing a school sounded insane. My mother in-law, who (unlike me) has lived for decades in Zaharna Fabrika and knows all local gossip, told me how it happened.
"The school was closed because it had too few students; as you know, schools with a number of students below the reglament are closed. When the downward trend first appeared, teachers and municipality officials tried to recruit additional students from the Gypsy ghetto. There were many school-age children there, but their parents didn't want to let them attend school. The officials offered the parents benefit money and they agreed. However, when those Gypsy children started going to the school, Bulgarian parents moved their children to other schools. Very soon there were fewer students than before enrolling the Gypsies, so the school had to be closed. I don't think it will ever be opened again. The building will most likely be sold and used for other purposes."
If you ask what happened to the Gypsy schoolchildren - I cannot be sure, but I guess they have returned to their so-called parents and now don't go to any school.
My husband, who had attended School No. 110, was saddened when he heard about its demise. His mother laughed and said that he may now pretend to be sad, but does he remember how after the big earthquake in 1977 he expressed hope that the school building has collapsed?
To end the post - I don't intend for the moment to discuss the big question of educating all children and inclusion vs. segregation. Let me just mention here that if regarding disadvantaged children as mere obstacles to other children's education is troubling, I find at least as troubling the attitude of regarding "privileged" children as little civil servants who are obliged to go to school in order to educate and integrate, rather than to learn. I'll be thankful to readers who share their own experience in these matters.
Posted by Maya M at 10:37 PM No comments: