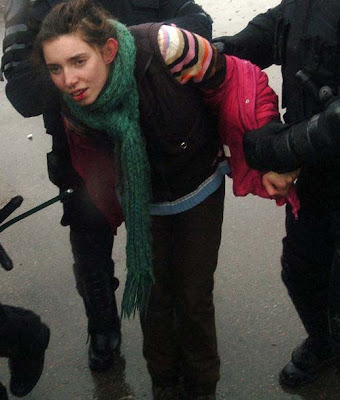 On Jan. 14, between 2000 and 3000 people attended an anti-government protest in front of the National Assembly (the Bulgarian Parliament) in Sofia. Protesters were students demanding order and safety in the campus, conservationists protesting against a proposed change in the Forest Act allowing easy destruction of forests, farmers demanding the subsidies they are entitled to under EU legislation, and many other people united by their strong disapproval of current Bulgarian government. Among the thousands of peaceful protesters, a group of fewer than 50 young men attacked police and broke some windows, including one of the Parliament building. Police didn't make a serious try to control them.

However, anyone who thought that police wouldn't be active was soon to be proven wrong. Let me quote the BBC report Protesters fight police in Sofia: "When an anonymous bomb threat was received, the Deputy Mayor of Sofia, Yulya Nenkova, issued an order to break up the rally, local media reported. The police then used force to disperse the protesters, who were demanding the resignation of the Socialist-led government."

So much about the brutal and indiscriminate use of police force against a peaceful, allowed protest in a EU member state. The two other foreign media reports about the rally that I managed to find, by AFP and Reuters, don't mention that turn of the events at all. Among non-government activists, only the French conservationist David Morrand expressed support for the protesters.

Bulgaria media, despite giving undue weight to the mild and isolated acts of vandalism that accompanied the rally, did their job better. E.g. Dnevnik paper published a report titled Provocations and police force destroyed the protest. I am translating its initial part:

"Only an hour after its beginning, the united protest of students, conservationists and farmers was banned by the Municipality of Sofia after a demand by the police. Another hour later police dispersed by force the 2000 or more demonstrators gathered in front of the Parliament and started chasing them over the streets of Sofia."

Participants and eye-witnesses say that protesters were given absolutely no order or warning, that they were beaten indiscriminately, including children, women (see photo), elderly people and people already lying on the ground, that police chased people to closed streets and alleys, presumably to prevent them from escaping unhurt. (This description fits the well-known pattern of behaviour that has been shown by Bulgarian police on many earlier occasions.) Questions are asked how can a rally be first allowed and then banned while taking place and why, if there had been indeed a call so conviniently delivering a bomb threat, police dispersed only the protesters and didn't evacuate the Parliament building. Bulgarian readers can see e.g. the above quoted Observer post and the blog post by opposition leader Martin Dimitrov (and the comments to it). In his post, Dimitrov claimed that his colleague Borislav Borislavov was injured while trying to protect old ladies.

It isn't quite clear how the arrested protesters were dealt with. The next day (Jan. 15), opposition MP Ivan Kostov announced in the Parliament that police had arrested minors and forced them to sign forms that they didn't want attorneys. The same day, BTV channel reported that detained people were tried using the short procedure and quoted a mother claiming that her son had been arrested in the street without having attended the protest at all.

After this rather impersonal description where I am trying to pose as an amateur reporter, because professional reporters don't seem to be doing their job, let me share my own thoughts.

The Jan. 14 events don't surprise me at all and so don't trouble me too much, because this is the Bulgarian reality as I know it. What is worrying me is the silence in foreign media and the indifference of international (esp. European) public opinion. In small, weak countries like Bulgaria, foreign criticism is a very important regulator of domestic policy. While I am staying aside of the current protests, I have taken part in many similar ones in the past. Generally, these rallies were better reported and the presence of cameras not only helped the achievement of good things in some cases but also served to guarantee, to some extent, the rights and safety of citizens in a country where police is regarded by the authorities mainly as a tool to quash dissent.

The situation has worsened much since Bulgaria joined EU in early 2007. Indeed, some media have done an excellent job to report the outrageous plight of our institutionalized disabled children. However, what Westerners don't seem to realize is that non-disabled, non-institutionalized adults in a formally democratic EU member state also can have very little control over their fate and be stripped of most basic rights. The only aspect of the situation in Bulgaria that is properly reported in European media is the rampant corruption. This makes sense, because this aspect of the Bulgarian situation directly empties the pockets of European taxpayers. However, people who love democracy should also think of the nascent civil society in Bulgaria which is struggling to survive. It needs help and after this help costs so little (just to spread the word), I don't see why it isn't being given.

In conclusion, while I had doubts about the wisdom of the Jan. 14 protest (for reasons that I don't wish to discuss here), it achieved something very important: it proved beyond any reasonable doubt that in Bulgaria the right to public protest, similarly to freedom of speech, exists only until somebody tries to use it.

Heh. You seem to have illusions about the EU. What else did you expect? Their real name is EU SSR.

So is Bulgaria's system edging closer to the Russian one?

I think you have much right (in both comments).