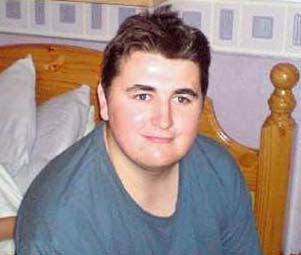 
I first blogged about Nicky Reilly on June 26, 2008. These days, I googled his name to check for any news on him and saw that he was tried and convicted in January. Below, I am quoting most of a Jan. 31 report from the Times:

"Nicky Reilly, Muslim convert, jailed for 18 years for Exeter bomb attack
Adam Fresco, Crime Correspondent
A vulnerable Muslim convert who was persuaded by extremists to attempt a suicide bomb attack was jailed for a minimum of 18 years yesterday.
Nicky Reilly, 22, who has Asperger’s syndrome and a mental age of 10, was described by his lawyer as the “least cunning” person ever to have been charged with terrorism...
At his trial in October last year Reilly, from Plymouth, Devon, who appeared in court as Mohamad Abdulaziz Rashid Saeed, pleaded guilty to attempted murder and preparing an act of terrorism.
Sentencing him to life imprisonment at the Old Bailey yesterday, Mr Justice Calvert-Smith said that although the attack was “an unsophisticated attempt”, Reilly was a “significant risk” to the public.
After his conviction, counter-terrorism officials said that extremists had taken advantage of his low IQ to groom him.
Reilly, who has an IQ of 83, had first been taken to see a pyschiatrist when he was 9 and tried to take an overdose at 16. Kerim Faud, representing him, said: “He may comfortably be deemed to be the least cunning person ever to have come before this court for this type of offence.”
He is thought to have met British-based Muslim radicals in internet cafés near his council home, which he shared with his mother.
Security sources said that radicals encouraged him to visit internet chat rooms and other websites, where he encountered men based in Pakistan who helped to mould a violent hatred of the West. He discussed with the men what his targets should be and they directed him to bomb-making websites.
In a suicide note left in his home he paid tribute to “Sheikh Osama” (bin Laden) and called on the British and US governments to leave Muslim countries. He said that Western states must withdraw their support of Israel, and that violence would continue until “the wrongs have been righted”.
On May 22 Reilly put his plan into action... When he arrived at the Giraffe restaurant he ordered a drink and sat for ten minutes before heading to the lavatory to make the bombs.
Fortunately for the 24 customers and 11 staff in the restaurant and the 20 more people lunching outside, the bombs exploded in the cubicle.
Mr Justice Calvert-Smith said yesterday: “I am quite satisfied that these offences are so serious that only a life sentence is appropriate. This defendant currently represents a significant risk of serious harm to the public.
“The offence of attempted murder is aggravated by the fact that it was long planned, that it had multiple intended victims and was intended to terrorise the population of this country. It was sheer luck or chance that it did not succeed.”
He accepted that the attack was unsophisticated but added: “Those who attempt to commit suicide and in doing so murder other people are almost invariably unsophisticated in many aspects. That lack of sophistication saved many Londoners on July 21, 2005.” "

Those who know me will confirm that I am definitely not a fan of Islamic extremism - or, for that matter, of any thing Islamic.
However, the harshness of the sentence raises my outrage. 18 years! I know of many Palestinian failed suicide bombers who were non-disabled and nevertheless were treated much more leniently by Israeli courts. Justice must be driven by more serious considerations than the knee-jerk feelings of people concerned for their own safety. Reilly has mental disabilities, which in any civilized country should mean not to hold him responsible the way a typical person would be held after doing the same thing.
I also think that some disability advocacy and self-advocacy movements may be doing a disservice in such cases. In recent times, they often make efforts to portray people with mental disabilities as identical to non-disabled people in all respects except in the need of some extra services. As the Self-Advocates Becoming Empowered stated, "Our mission is to ensure that people with disabilities (a) are treated as equals, (b) are given the same decisions, choices, rights, responsibilities and chances to speak up to empower themselves, and (c) are given opportunities to learn from mistakes, as everyone else". However, in real life there are too many mistakes that can be made only once. I understand that nobody wishes to be stereotyped as a person with decreased ability to tell right from wrong, but I fear that the demand "Give us all the rights and responsibilities of the non-disabled" is leaving people like Nicky Reilly behind.

To end this post (in fact, as an instant update to it), I am quoting a comment to Fresco's report in the Times:
"Prison? Secure hospital accommodation surely, and all since the support he needed earlier in life was absent or inadequate. I fear the real terrorists were the first people to accept him and warmly (but falsely) welcome him in. Tempting, for a depressed outsider.
(adult with Asperger's) Chris , Launceston, UK"
Posted by Maya M at 11:00 PM

I agree. Compare to this:

Hammadi served nearly 19 years of a life sentence for air piracy, possession of explosives and the murder of Robert Dean Stethem, a U.S. sailor from Waldorf, Md. Stethem, a passenger on board TWA Flight 847 from Athens to Rome, was singled out for brutal treatment by the hijackers because of his military service.

Organized by the radical Shiite Muslim group Hezbollah, the hijacking was one of the most publicized terrorist attacks on a U.S. target in the 1980s. It lasted for 17 days as the plane, with dozens of hostages aboard, shuttled between airports in the Mediterranean.I can't understand why somebody who was convicted of an actual hijacking and actual murder served the same sentence this man has been given for a crude attempt that resulted in no harm being done, and which he was manipulated into. It's a very strange world we live in.

You are right. As far as I know, British justice just cannot deliver a sentence more severe than the one Reilly received! So his mental state amounted to nothing.

When i read all the other reports about this guy Nicky Reilly, one word springs to mind, Patsy.

Another creation to keep us all submissive to the state.

Just to mention that I've just deleted a long discussion with an anonymous disability-hating troll who overstretched my highly elastic patience. Why on Earth do some people think that I have started a blog for them to come and abuse me?