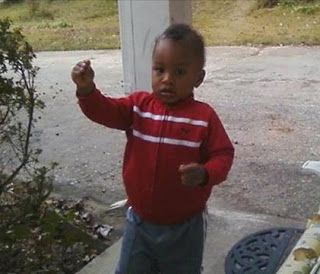 Amir Jennings shortly before his disappearance, photo copied from wltx.com

Almost a year ago, I wrote about the disappearance of then 18-month-old Amir Jennings from South Carolina. His mother Zinah did not report him missing and when questioned, refused to reveal what had happened to him. To me, and not only to me, the entire case chillingly resembled the story of Casey Anthony, unreasonably acquitted for the murder of her 2-yr-old daughter Caylee. This was what I, and not only I, had feared: another mother wishing to get rid of her unwanted toddler had been encouraged by Anthony's "not guilty" verdict and emulated her, hoping to get away with her child's "disappearance".

This post is a tribute to Amir Jennings and therefore shows his picture. My first post did not include such an image. Even if my blog was popular among Americans, I knew the photo would be of little use for the search, because by the time Amir would be found, he would have lost all resemblance to it. He hasn't been discovered yet, and most likely will never be. Caylee's remains were miraculously spotted months after her disappearance, in a swamp - a bag of bones carrying marks of gnawing by wild animals. Just try to look at the world through the eyes of a detective and you will see vast and unaccessible spaces hiding bodies of victims and weapons of crime.

As months were passing, I periodically checked the Web for updates. And the autumn brought them. While everybody was sure that little Amir was no longer among us, prosecutors didn't dare to press murder charges in the absence of a body. So Zinah Jennings was charged with "unlawful conduct toward a child", an expression in US law apparently used for parents allowing or making their children disappear. On Sept. 7, the jury agreed on "guilty" after less than three hours of deliberation, and the judge gave Zinah the maximum sentence of 10 years in prison.

Let me praise the jurors who kept their duty and made the right decision. Of course, a decade behind bars is too little for a monstrous crime like this. Still, the sentence will serve a purpose. Zinah Jennings was pregnant when arrested and later gave birth to a girl. I don't know what will happen to this baby, but at least she will be spared her brother's fate. And at least, as long as Zinah is imprisoned, she won't be able to deliver and kill more babies. Most importantly, other potential child murderesses may be taught a lesson: precedents may be precedents, but Casey Anthony's acquittal does not necessarily mean open season on US children. If you follow her footsteps, you may get a different verdict at the end of the day.

Rest in peace, Amir. On behalf of all who cherish human life, and all who have suffered from evil: We miss you.
Posted by Maya M at 12:52 AM