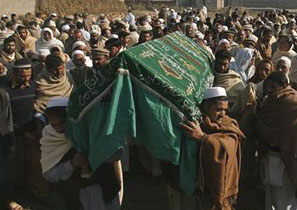 
"Hundreds of villagers in northwest Pakistan turned out Wednesday to bury five female teachers and two health workers who were gunned down a day earlier by militants in what may have been the latest in a series of attacks targeting anti-polio efforts in the country.

The seven had worked at a community centre in the town of Swabi that included a primary school and a medical clinic that vaccinated children against polio. Some militants oppose the vaccination campaigns, accusing health workers of acting as spies for the US and alleging the vaccine is intended to make Muslim children sterile.

As mourners carried the coffins through the town for burial Wednesday, family and friends expressed horror that such an attack had struck their community.

"I told her many times at home `be careful as we are poor people and take care of yourself all the time,'" said Fazal Dad, whose daughter was among the seven killed. "And always in response she said: `Father, if I am not guilty, no one can harm me.'"

The group was on their way home from the community centre where they were employed by a non-governmental organisation when their vehicle was attacked Tuesday. The four militants on motorcycles spared the young son of one of the women who was riding in the van, pulling him from the vehicle before spraying it with bullets. The driver survived and was being treated at a Peshawar hospital..."

Below - the viewpoint of the world medical community, from the Jan. 5 Lancet editorial Global polio eradication: not there yet


"...Recently, the global effort to eradicate polio has suffered devastating setbacks. In mid-December, nine health workers were shot dead while travelling from house to house to administer polio vaccine to children during the national anti-polio campaign in Pakistan. And on Jan 1, six female Pakistani aid workers and a male doctor were shot dead... Owing to the safety concerns, the UN was forced to halt its participation in the vaccination campaign, and the campaign itself has been suspended temporarily by the Government of Pakistan and the affected provinces.

...Most of the health workers who were killed were women, and the youngest was a schoolgirl aged 17 years. Female health workers are standing fearlessly and selflessly on the frontline of Pakistan's war against polio, because culturally only women are allowed to enter into houses to talk to mothers and vaccinate their children. Last June, in Federally Administered Tribal Areas, the Pakistani Taliban banned polio vaccination in retaliation for the use of unmanned drones by the USA. It is of deep concern that women who stand for something big have become the Pakistani Taliban's target. Female polio health workers are one example; the schoolgirl Malala Yousafzai, whom the Taliban shot in the head in October for campaigning for access to education—another essential ingredient in promoting children's health—is another...
Heidi Larson, an anthropologist who studies public trust in vaccines and immunisation at the London School of Hygiene and Tropical Medicine, pointed out that the killings of health workers in Pakistan could be a “game changer”... She compared it with the 2003-04 immunisation boycott in northern Nigeria, led by religious and political leaders, who claimed that the oral polio vaccine could cause sterility. This boycott led to poliovirus not only rebounding in Nigeria, but also spreading to 15 African countries and to Indonesia...
To eradicate polio, the work that the brave polio health workers died for must be continued in 2013..."
Posted by Maya M at 5:38 AM