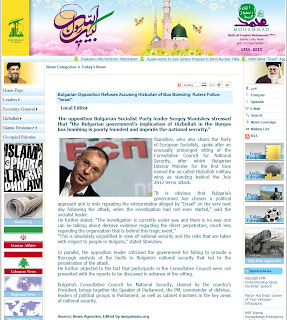 Seven months after the July 18, 2012 bombing of a bus with Israeli tourists which killed five young Israelis (including a pregnant woman) and the Bulgarian Muslim driver, authorities announced news about the perpetrators: Hezbollah, as had been suspected right from the beginning.

Actually, back in July the Israeli prime minister Netanyahu blamed Hezbollah immediately after he heard of the terror act - which was, to my opinion as well to that of many others, irresponsible and unwise. However, at the same time all serious people were 97% sure that, indeed, Hezbollah was behind the attack. The reason: while we have become accustomed to living in a global war, in the months preceding the Burgas bombing all had been quiet except the killing of several Iranian nuclear scientists by Israel. Hence, the gang currently "ruling" Iran was strongly motivated to order its proxy Hezbollah to kill some innocent Israelis in revenge, and did it - on Bulgarian land.

Relatives of the Israeli victims and disabled survivors of the bombing expressed hope that Europe and the world will finally see the truth about Hezbollah. However, EU is still unwilling to call the "God's army" a terrorist organization because of fears that this would complicate relationships with Iran and Lebanon (the latter seems to be, for all intents and purposes, under Hezbollah's full control).

Let me end this post with an amusing detail: Sergei Stanishev, the leader of the Bulgarian Socialist Party since 2001 and the leader of the Party of European Socialists, the second-largest party in the European Parliament since 2011, was so eager to defend Hezbollah that he was featured on Hezbollah's Web site! The image above is a screenshot from the page in question. If you doubt the moral degradation of socialists and their unholy alliance with Islamists, just look at this small piece of evidence.
Posted by Maya M at 1:21 PM