(Bulgarian readers can find this post also on my Bulgarian blog.)

In June, my father Dyanko Markov together with Georgi Chunchukov from the city of Dobrich and Filip Pitelov from the Association of Bulgarian Expatriates was invited to attend a ceremony to unveil a memorial plate of Misho Hadjiyski in the village of Inzovka, Ukraine. I of course felt quite uneasy because of the situation in Ukraine and the advanced age of my father. (It was difficult to manage his travel insurance, because for most insurance companies, people of my father's age simply do not exist.) This event made me learn more about the Taurian Bulgarians, whom I had known just by name.


When we Bulgarians talk about Taurica, we usually mean the region north-west of the Sea of Azov, where many ethnic Bulgarians settled in the first half of the 19th century. They kept their language and traditions because there was no local population to influence them - until their coming, the region was desolate. The settlement was under the auspice of Russian general Ivan Inzov. To facilitate the cultivation of Taurica, he ensured that the settlers would have rights of free people. At that time, the Russian peasants as serfs were deprived of such rights.


Taurian Bulgarians generally lived well until the October Revolution of 1917. After that, they together with the other Soviet subjects had to face the repressive terror of the Bolshevik regime. Although they had been farmers for many generations and had turned their land into a granary, they suffered and a number of them died in the Holodomor - the genocide organized by Stalin to subdue Ukraine, considered too unruly. 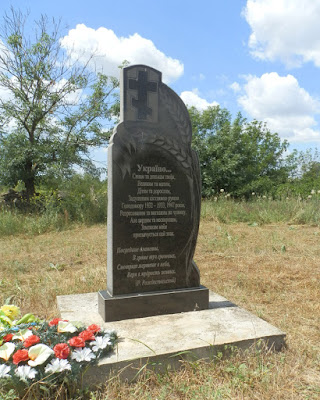 Memorial of the Holodomor victims near the village of Tyaginka, between Odessa and Taurica. Above, there is an inscription in Ukrainian: "Ukraine, to your sons and daughters, great and small, children and adults, suffocated by the bony hand of the Holodomor in 1932-33..." Below is a verse in Russian by the well-known poet Robert Rozhdestvensky: "Posredine planeti / V grome tuch grozovih / Smotryat myortvie v nebo / Verya v mudrost zhivih." (Amidst the planet, / In the thunder of stormy clouds, / The dead are staring into the sky, / Trusting the wisdom of the living.) 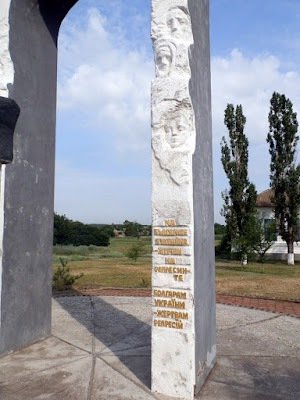 Memorial in the village of Kolarovka (Taurica) of the ethnic Bulgarian victims of Stalinist terror. The inscription in Bulgarian and Ukrainian is: "To the Bulgarians of Ukraine, victims of the repressions."

After Nazi Germany invaded the Soviet Union and occupied Ukraine, Taurian Bulgarians wrote a letter to the Bulgarian king Boris III on April 20, 1942. I am translating a part of the text: "In this war between the two great states, we have been ruined and abandoned. Our prosperous villages have been turned into deserts... We have heard, King, that your Kingdom is an ally of Great Germany, may God help you in everything you do, but we are asking you for one favor: Let our plight is alleviated at last, let the Germans allow us to have in every Bulgarian village authorities of our own, subordinated directly to the Germans rather than to the Russians... Send here to Taurica an envoy to protect us... We shall be glad if you right now decree for all us sixty thousand Bulgarians to be accepted in Your Kingdom. Maybe there will be free lands for us to settle. We are not many, we are here [concentrated in] twenty-eight villages at the shore of the Sea of Azov, between the towns of Melitopol and Berdyansk. We are ready to share in the joys and sorrows of your Kingdom but to be under your protection. If we cannot settle all at once, King, allow to a part of us to come, so that we all move to Bulgaria in one or two years. We had turned Taurica from a desert into a Paradise on Earth. Give us desolate lands and we will settle there, because we have always lived by honest work..."

The letter was signed by 15 people. Most important, however, was the role of a young man whose signature was third, the writer Mikhail (Misho) Hadjiyski from the village of Inzovka. After obtaining permission from the Bulgarian authorities, he led nearly 2000 his compatriots to Bulgaria in 1944. The refugees were traveling on their own, in very harsh conditions, sometimes crossing battlefields with their horse carts. Upon arrival, most of them settled in Southern Dobruja, a region only recently reunited with Bulgaria. Misho Hadjiyski met Savka Nikolaeva, a university student from Sofia, and they married in late August.

However, the refuge in Bulgaria was too short-lived. In September 1944, Bulgaria itself was occupied by Soviet troops who installed Soviet puppets as new rulers. At the end of the month, Misho Hadjiyski was arrested and tortured. Some Bulgarian leftists advocated for him and he was released in the middle of November. However, on December 7 militiamen came to arrest him again and he committed suicide, shooting himself in the head. He was only 28 years old and had been married only for 3 months.

The next year (1945), Taurian Bulgarians who had moved to Bulgaria were sought one by one, dragged into trains and deported to the deserts of Kazakhstan - the method of genocide preferred by Stalin because it reliably destroyed a substantial part of the unwanted population without leaving troublesome evidence like gas chambers. As some commentators noted, the Bulgarian nation had managed to rescue its Jews two years before, but now was unable to rescue the Taurian Bulgarians.

At present, Bulgarian Taurica is divided. Its eastern districts have been affected by Putin's land-grabbing campaign and are currently under the control of pro-Russian separatists, but most of its territory is in free Ukraine, at least for now. Inzovka, named after the benefactor Inzov, is also in Ukraine. Until recently, the village school had no name, but now it is named after Misho Hadjiyski. The naming ceremony took place on June 18 and included unveiling a memorial plate of Misho Hadjiyski at the front wall of the building. 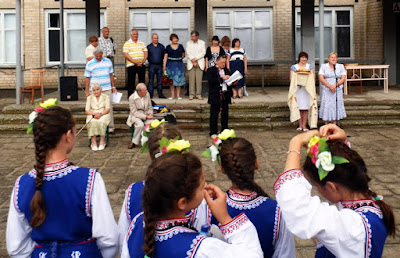 Nona Popova, Mayor of the village of Inzovka, is reading the naming order. 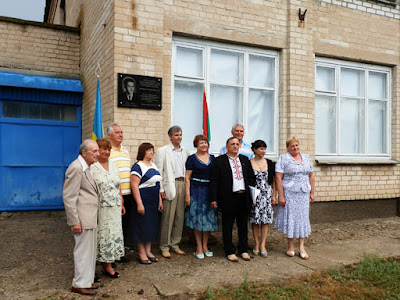 In front of the memorial plate, moments after it was unveiled. 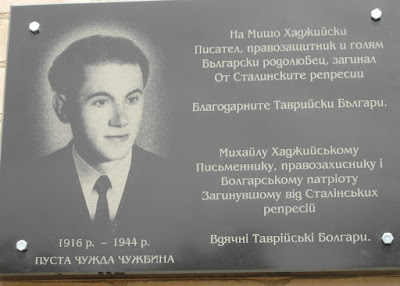 The memorial plate, with inscriptions in Bulgarian and Ukrainian: "To Misho Hadjiyski, writer, human rights activist and Bulgarian patriot, killed by Stalin's repressions, from the grateful Taurian Bulgarians." 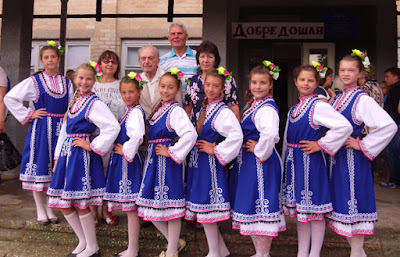 The guests from Bulgaria with a folklore group of Taurian Bulgarian children. The tall man is Georgi Chunchukov, next to him is my father.

The photos in this post were sent to me by Georgi Chunchukov; his report about the visit was also of much help to me in writing this text.

Savka Nikolaeva, the widow of Misho Hadjiyski, is still alive but is bed-ridden and cannot attend the ceremonies in honor of her husband. She did not remarry after his death. Stalin's terror not only took the life of Misho but ruined her life as well.

After his meetings with Taurian Bulgarians, my father was impressed that despite the past sufferings and the numerous innocent victims they hated nobody. Now, they only want to be free, to live their lives as they choose and to create material goods and culture. We had heard allegations of strong pro-Russian sentiments among this community, but they turned out to have been much exaggerated. Like most other Ukrainians, Taurian Bulgarians are looking in the direction of Europe and hope for their country to be admitted into the European Union. Alas, "old" Europeans are too inclined to betray the founding principles of European civilization and to seek only security and material well-being, which naturally leads them to collaboration with the aggressor Putin. In the long term (and even not so long), this endangers not only Ukraine but also Europe itself. Therefore, as my father said, the future of Europe depends on the survival of independent Ukraine.

I am glad that in the same year in which the residents of Inzovka could finally honor their countryman Misho Hadjiyski, honors to him and the Taurian Bulgarians led by him were paid also in Bulgaria. This is happening exactly in Dobrudja where the refugees were accepted and hoped to find new homes. A memorial plate dedicated to the Taurian Bulgarians will be unveiled today in the city of Dobrich, in front of the municipality building. So everyone who passes through the center of Dobrich will remember the events of 1944-45 that must not be forgotten.
Posted by Maya M at 4:16 AM

Thank you very much for this post. I had never heard of the Taurian Bulgarians and Misho Hadjiyski until now. I do know of other somewhat similar stories, e.g. the Volga Deutsch. I am impressed by the resilience of these people, and while their stories tend to be tragic, their strength always leaves me feeling hopeful for the future.