My fears about the future of Europe and the world

My friend Bill Moulton, commenting on my previous post, agreed with those who think that the world is getting better.


I have had times when I have thought the same, e.g. after the fall of communism in 1989, the breakdown of the Soviet Union in 1991 and the ending of wars in former Yugoslavia by NATO intervention. However, most of the time I have been pessimistic about the future of Europe and the whole mankind, esp. after the mid-2000s. 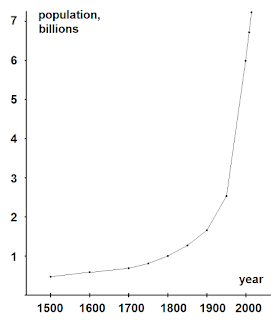 The last point corresponds to the 2014 estimate of 7,215,000,000 people. How do you imagine the future of a population with this dynamics? It can curb and become flat and then decline slowly. This is the optimistic scenario. However, it can also curb and decline fast, like a bacterial culture in the death phase.


Actually, I think the very fact that we are making comparisons with the catastrophic immediate aftermath of World War II speaks volumes, even if the comparisons are reassuring.


The global political situation is grim. Pax Americana is over. Bush Jr. compromised it, then Obama destroyed it altogether. It was not perfect, but I miss it. Without it, the world is scary. Even if you take such a minor but telltale sign as the resurgence of piracy that accompanied also the end of Pax Romana.


With the decline of US power, of course, every well-armed bandit state makes a bid for the vacant superpower status. Russia is invading, killing and grabbing land once again, pulling down by force other nations to the level of its misery. No one in Eastern Europe should feel safe anymore.


There is, however, an even more sinister threat to Europe: the invasion of Islam. The large-scale, uncontrolled migration from Third World Muslim countries to Europe is threatening to destroy the cultures of the continent and to reduce its native population to pariah status, a fate my nation has already suffered in its history, living under Ottoman domination for almost 5 centuries. Frankly, with the current scale of the migration process and the determination of European elites to continue it at all costs and against the will of ordinary Europeans, I see little hope for the future of Europe. In 100 years, I imagine the continent as a conglomerate of Muslim-majority states, all of them failed by any reasonable standard, as is now every single Muslim-majority state on Earth.


I expect now that indignant readers will jump to the comment form and start writing that most Muslims are good people. Of course, they are. But the same can be said about most early Indo-Europeans, most Huns of Attila, most Ottoman Turks, most European settlers in the Americas, and most Germans and Russians in the 1930s and 1940s. Every single human wave in history and prehistory that has wreaked misery and destroyed civilizations on its way has been composed mostly of nice people, if you don't judge them too harshly. This, however, is small consolation for the victims.


America could at least take a lesson from Europe and down-regulate Muslim immigration before it's too late. There is, however, little hope for this. The only high-profile politician promising such a policy is the Republican presidential candidate Donald Trump. However, he is an aggressive mentally unstable crook and habitual liar who shouldn't be trusted to run a grocery store. The Democratic candidate Hillary Clinton, who will most likely be the next leader of the free world, is an appeaser of Islam and promoter of large-scale Muslim immigration.


These days, several bombs were planted in New York and New Jersey, and some exploded, injuring more than 30 people (happily, nobody was killed). Such Islamist terror acts, which I interpret as claims for domination, are becoming more and more often. So far, there is a single suspect - Ahmad Khan Rahami (28), an immigrant from Afghanistan. Well, can you guess whom is Clinton blaming? Not the terrorists, and not the religion/ideology inspiring them, but her opponent! Because, as she allegedly said, "Trump's comments have been used online for the recruitment of terrorists". With such a leader, Allah help the free world, or what has remained of it. My American online friends are divided in their choice for whom to vote, but no matter whether it's Clinton or Trump, they will vote holding their noses.


The good news is that the dracunculiasis eradication campain is close to its successful ending, and the polio eradication campaign is advancing, although extremist Muslims try to stop it by attacking and killing vaccination workers. Let's hope that Dracunculus and the polio virus will share the fates of smallpox and rinderpest viruses. Whatever troubles has the future in store, it will be better to face them in a polio-free world.
Posted by Maya M at 3:49 AM

Quite thoughtful analysis. If Pax Americana really is over, the world will be engulfed in war. There are two many tyrants in second class powers who will try to fill the vacuum.

However (I posted before I finished) I think the evidence is fairly good that population growth will decline and total population level off; given that the world continues to develop economically, this is what to expect. In a high income country, the opportunity cost of havig a child is much higher, both from direct expenses (education, health care, etc.) and forgone workplace opportunities for mothers. Economist Gary Becker observed that with economic advance, people invest more in their children, substituting quality for quantity. The empirical evidence is that this holds regardless of other factors, such as culture.

Of course, continuation of economic development and growth presumes we don't kill ourselves by adopting socialism and war.

Thank you! I hope you are right.