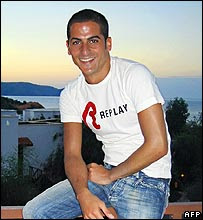 "The question is, why do ordinary native Europeans like Nomad embrace this pernicious policy even in circumstances when they have no reason to fear for their own safety? "

because it's lot of noise made around are journalist extrapolations, mainly foreign of anglo-saxon sources though ;that are justice domain ;

In that case, the murderer foccused on Ilan, because he wanted money from a supposed rich population : the jewishs ; we call that sort of crim a debauched crim ;

and this is not the only "gang" story we have ! bizarre this one was well mediatised, in a period where Israel and France had difficulties to accord themselves on a policy ; I bet thatnow, with Sarkozy, this affair would not have been such a trouble

anyway, I regret that happened to Ilan, peace to him

So you agree with Minister (now Pres.) Sarcozy that kidnappers/murderers were "antisemitic by amalgam" (i.e. having stereotypes that Jews have money and stick together as a community, stereotypes that in an earlier time helped to conceive the Holocaust).
I think that, moreover, the extreme and irrational cruelty Ilan was treated with also suggest a hate element in the crime.
I agree that Ilan's story received more publicity than other similar ones and that what we hear from media is just the tip of the iceberg, just cannot see why you find this comforting!
My observation is that when the perpetrator(s) and victim(s) of a crime differ by race and/or culture, in most cases the crime is partially or wholly motivated by hate.
Of course authorities try their best to deny this truth. In Bulgaria, when Gypsies rioted, attacked Bulgarians and destroyed property, authorities denied the ethnic nature of this behaviour. When later Bulgarians attacked Gypsies and killed one, official sources again denied the hate motif and described the crime as "a clash between two youth groups". (Some of these events are described in my August posts "Bulgarian police: Our safety first!" and "Gypsy teenager murdered by Bulgarian teenagers".
Why are authorities so eager to deny the existence of ethnic tensions? Because if they admit it, they have also to admit that, first, their claims about the wonderfully progressing minority integration have been a lie, second, the country is in big trouble, and third, something must be done about it.
So they prefer to bury their heads in the sand. We mustn't allow this.

why would we deny a crime being anti-semit if it was avered it was ?

We are the nation who acknowledged the holocost in our constitution, idem for the armenian genocide,

we have the biggest jewish communauty in EU, and Israel, tried to make think our jewish population that France is a Hell for jewishes ; they want them to emigrate to Israel, cause there the population is not numerous enough to conterpoint the arab environnement.

and I am tired to repeat always the same shit, cause people are unaware of the realities

you haven't experimented Bashing in your country because of your political position on Irak war and Israel policy vs Lebanon ; we did, and it is not quite over.

Nomad, if you think that we Bulgarians "haven't experimented Bashing because of our political position on Irak war and Israel policy vs Lebanon", visit my Nov. 12 post "Anti-Bulgarian bias..." - it gives a link to a NYT article titled "Bush's Warshaw War Pact". Read it and you may re-define your concept of what "bashing" is.
In Febr. 2003, then-Pres. Chirac accused the 10 "New European" countries of being childish and irresponsible. "They missed a great opportunity to shut up," he said. Chirac also warned that Bulgaria and Romania could have jeopardized their accession process to the EU through their "reckless support" of the US.
Instapundit reports at http://www.instapundit.com/archives/week_2003_02_16.php, "Last week the French ambassador to Sofia warned Bulgaria that its pro-American stance could jeopardise its efforts to join the European Union. "Bulgaria has to consider carefully where its long-term interests lie," Jean Loup Kuhn-Delforge said last week. "When people live in Europe they should express solidarity and think European-style.""
Bulgaria was repeatedly bullied by France not only at political but also at everyday-life level. Bulgarian applicants for French visas were systematically humiliated by the Embassy. One of them was beaten by an official (both female). After France became world soccer champion, the Ambassador said that Bulgarians expressed no joy over the event and, hence, they had no right to protest about how they were treated by the Embassy. (It later turned out that the same French officials who were turning back honest applicants and treating them like shit had made a ring to supply criminals with visas. There was an investigation in France, I don't know how it ended.)
And after all this, France helped so much the release of Bulgarian medics from Libya. You are right, Nomad, I surely don't understand France! But, while I am grateful for occasions when France acted good, I also mention that these occasions are few and far between and I would never rely on France for anything.
In my post, I was criticizing not only France but the entire EU, even the entire Western world. Kriss Donald wasn't French (or Jewish, for that matter). The Islamist gang-rapes are worse in Scandinavian countries. And the whole EU has anti-Israel, pro-Arab bias, which became evident e.g. during the last year July War.
These are also realities.

If, we had had the opportunity of choice for EU, there would not have been more than the 10 former and first EU nations, for the main reason that we share (in the average) the same policy, and if you want really become part of the EU program, then your country will have to adapt and have the msame goal in foreign relations ; it is clear that we can't afford to have different policies ; and in the future, we'll be all by our own, that means the US will mind their own businesses, cause with the low dollar, they'll have hard time to carry on their foreign policy ;

Which, for God's sake, are "the 10 former and first EU nations"? I am right now reading in Wikipedia that EU was founded by France, West Germany, Belgium, Italy, Luxembourg and the Netherlands. This makes 6 countries. Then Denmark, Ireland and UK joined - 9 countries. Then Greece, Spain and Portugal - 12 countries. Was there any moment when EU consisted of 10 nations? And how many of these early member states have foreign policies similar to the French ones?
Nobody has 100% accurate perception of the world but yours is so distorted that doesn't touch reality even tangentially. For that reason, in the future I don't intend to trust any information supplied by you. Not that you are lying - you are just deceiving yourself.
Most of it is wishful thinking, of course. France wants all European countries to have a common foreign policy, that is, to say and do what France wants. The widespread anti-Americanism in Europe may mislead you to believe that people like France and the French, but this is not true. Even those who disapprove the US and British policies prefer in their personal and business matters to deal with Anglo-Saxons than with French.
And although the euro is high, I wonder on what money France intends to carry on its foreign policy. In fact, France demands obedience from others without offering them money or anything. This approach of course doesn’t work.

neither do I care of your statments wich I find narrow-minded ; you want to look like an aware educated person, but you just are able to express clichés and frustrated feelings he, may-be the street persons of your country are better intentionned

I have no idea why so many of my critics think that I am writing in order to be liked, to present myself as a good person etc. And as far as I remember, I have never claimed to be better intentioned than the street person of my country (not that I understand why there must be something wrong with the street person of my country). I intend to change my "About me" text soon, in case the fault is there.
About the "looking like an educated person", if I really want it, all I need to do is to scan and post my diplomas. They are what makes a person educated, not political correctness.

if that doesn't give you the superiority to give moral lessons, we are OK on the last one

Of course education cannot give moral superiority to anybody, I wonder where the idea originally came from. As for the moral lessons, everybody is free to give them, regardless of education or anything.