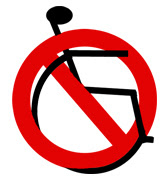 The image is copied from Marfa's blog, original source unknown.

Two months ago, adding a comment to my post about the disabled Bulgarian children abandoned in instituions, I wrote, "To be honest to these parents, it can be very exhausting to raise a disabled child without any support from society, when a school headmaster continuing her work after becoming a wheelchair user is national prime time news."

I was referring to Vanya Stoitseva, headmaster of a professional secondary school in the sity of Plovdiv. I had watched on BTV channel how this lady, who lost her ability to walk as a result of a cardiovascular problem, returned to her job. The school of course had no wheelchair ramp (very few buildings in Bulgaria have one), so the employees made one themselves from old doors and pieces of furniture. The school also had no lift, so her office was moved from the 2nd to the 1st floor. All this was reported with a sensationalist tone as if the people in Plovdiv hadn't done a good but still ordinary work but had accomplished a feat, e.g. invented a cure for AIDS or a method for cold nuclear fusion.

In Bulgaria, including a disabled person is indeed an achievement deserving national prime time TV news. And like most such achievements, it cannot endure for long. Because I rarely watch TV news, I am lucky that Marfa described in her blog what happened later (based again on BTV channel).

On Nov. 13, she wrote: "After every blunder of our government we think that those who have climbed so high that only their red rear ends are seen from below just cannot do anything more stupid - and they easily break their own record. Here is the story as I heard it from BTV news. Vanya Stoitseva is headmaster of the above mentioned secondary school. She uses a wheelchair... As she was at work, in her office, two men entered and informed her that whe was fired. They showed her an order signed by (education minister) Valchev where it was written that Stoitseva had to go away because her disability was at odds with her position... She hadn't received any notice... As she was sitting in dismay, they pushed her out of the room... and sealed the door until the arrival of the new principal, whenever this would take place... Teachers and students gathered and asked what was happening and the two men explained that Ms. Stoitseva was no longer their headmaster because she was disabled... The BTV tead contacted Mr. Valchev and he confirmed he had issued such an order. The Ministry of Education had received a letter signed by some teachers from this school who claimed that their headmaster could not do her job because she was disabled... Ms. Stoitseva intends to sue this sympathetic gentleman with a short beard and peculiar sense of humour first in Bulgaria and then in (the European Court of Human Rights in) Strasbourg. I wish her success."

Next day (Nov. 14), Marfa wrote a sequel: "Last night, I positioned myself in front of TV interested to see the eventual development of the case. When (speaker) Kadriev began to read a refutation from the Ministry of Education, I felt relieved. I thought that the initial report was exaggerated and distorted and as I was planning how to explain this in a new post, I heard what the essence of the exaggeration was: Ms. Stoitseva was not fired (Bulg. uvolnena) because of being disabled, she was dismissed (Bulg. osvobodena) for being disabled... The difference is tremendous, you must agree..."

Below Marfa reported that the teachers who sent the letter were activists of Podkrepa trade union and it seems that some disagreement between the union and the headmaster (probably related to the strike) was the true cause for them to write the letter. I watched on BTV news that some teachers allegedly claimed that their principal was too authoritarian (I say "allegedly" because not one of them repeated this in front of the camera).

Strictly speaking, there is nothing in a wheelchair that can prevent its user from being authoritarian, incompetent, of poor ethics etc. But if his dismissal is sought, and ordered, for such reasons, those signing the order should provide extra proof that the reason is legitimate and not discrimination against a vulnerable minority. Instead, here we see that whatever the true reason for the teachers to seek Ms. Stoitseva's dismissal, the formal pretext was her disability - and the Ministry agreed and signed without hesitation.

The place I am blogging from is presumed to be not Sparta, 4th century BC, but EU, 21st century.

I just wanted to say I find your blog fascinating. I live in the UK and visited Plovdiv and Sofia for a holiday last year. We enjoyed Bulgaria and found it a beautiful and interesting country. but I find your blog regularly astounding....I am certainly thankful my son who has disabilities resides here in the UK (for all it's faults.)

Thank you for your comment and best wishes to all your family!

This is fascinating. "Ms. Stoitseva was not fired (Bulg. uvolnena) because of being disabled, she was dismissed (Bulg. osvobodena) for being disabled... The difference is tremendous, you must agree..."
I am so confused by this comment.

"Uvolnena" carries a more negative connotation than "osvobodena" but means the same thing, similarly to "fired" vs. "dismissed" in English. By this "clarification", our arrogant government tried again to make fools of people. However, to save myself from justified criticism by government supporters, I duly used "dismissed" in the post title.