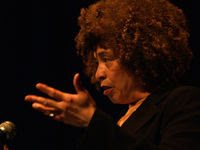 The Davis subject touched me as I was browsing Bulgarian blogs and found a questionnaire to check whether you are "a dear child of socialism raised in the 1970s" (I am). One of the questions was "Have you admired Angela Davis's haircut?". An apparently younger commenter asked who Angela Davis is and the blog host gave a link to her Wikipedia page.

Angela Davis, a US black Communist extremist, was tried 35 years ago after her gun was used by other people who attacked a courtroom and killed a judge. During her trial, John Lennon, who never uttered a word in support of Gulag prisoners or other innocent victims of oppression around the world, devoted a song to her, illustrating an aphorism of Bulgarian poet Atanas Dalchev that "unfortunately, talent is often unaccompanied by either personality or intellect". She was acquitted and Vladimir Bukovsky used her case to prove that Western courts often let Communists get away with crimes that would surely send a non-Communist to prison.

As a "dear child" (i.e. survivor) of socialism, I knew all this before. What was news for me in Angela's Wikipedia page was that "She has lectured at San Francisco State University, Stanford University and other schools. She is currently the Presidential Chair and Professor with the History of Consciousness Department at the University of California, Santa Cruz and director of the Feminist Studies department." If Davis was a genius in, say, mathematics or chemistry, then allowing her to become a university teacher, though still controversial, would make some sense. But WTF "History of Consciousness" means? Thankfully, Wikipedia gives a link showing that it is "an interdisciplinary graduate program in the humanities with links to the sciences, social sciences, and arts at the University of California at Santa Cruz... Perhaps the best-known graduate of the program is Huey P. Newton, co-founder of the Black Panther Party. Newton received his Ph.D. in 1980."

Back to Davis's page, we read, "A principal focus of her current activism is the state of prisons within the United States. She considers herself an abolitionist, not a "prison reformer," and refers to the United States prison system as the "prison-industrial complex." Her solutions include abolishing prisons and addressing the class, race, and gender factors that have led to large numbers of blacks and Latinos being incarcerated."

However, Prof. Davis's abolitionist views don't apply to prisoners in some other countries. The same source reports, "Russian dissident and Nobel Laureate Aleksandr Solzhenitsyn criticized Davis's sympathy for the Soviet Union in a speech he delivered to the AFL-CIO on July 9, 1975 in New York City, claiming hypocrisy in her attitude toward prisoners under Communist governments. According to Solzhenitsyn, a group of Czech dissidents “addressed an appeal to her: `Comrade Davis, you were in prison. You know how unpleasant it is to sit in prison, especially when you consider yourself innocent. You have such great authority now. Could you help our Czech prisoners? Could you stand up for those people in Czechoslovakia who are being persecuted by the state?' Angela Davis answered: 'They deserve what they get. Let them remain in prison.'”

This is in contrast to the claims in the above mentioned Utah University page: "Angela Y. Davis is known internationally for her ongoing work to combat all forms of oppression in the U.S. and abroad."

The same page, below: "During her sixteen-month incarceration, a massive international "Free Angela Davis" campaign was organized, leading to her acquittal in 1972." Please mention that the source actually admits that Davis was acquitted not because she was innocent but because the jury caved in under external pressure. I would draw an analogy between the Davis and the O. J. Simpson trials.

Amen. What implications has this for the ongoing "war on terror"? To combat terror by giving degrees and department chairs to terrorists? Because then they will be busy teaching history of consciousness, African American studies, feminist studies and other woo stuff to the unfortunate students and will have no time left for actual terror activities? Maybe it will work.

I am more outraged and disgusted that my words can express.

Fascinating. I have never heard this story before now.