Boyko Borisov: portrait of a winner 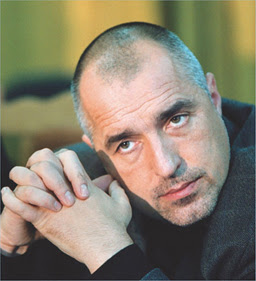 Pedantic point perhaps, but "miniscule" should be "minuscule". You come across as a pretty fascistic person, but I do find some of your thoughts stimulating and most of them interesting. If I lived in your household I would probably go through spells of not speaking to you, as well! Keep it up.

well i think I am living abroad long enough to consider myself capacity on English language, politics and everything you may think. I've been workink as a ground worker for 2 years, and just a little bit as a toilet cleaner. but in USA that's more than anything you do in BUlgaria. am i stupid enough?

Thank you, Maya! You should disseminate largely your analysis.
And to Anonymous: you are really stuped! And workinG - not K. Having into account that English is not Maya's mother tongue, she is just brilliant. And you better check your spelling. Zara

Clearly you don't like Borisov. But who do you like? It is not wrong for people to support someone they can identify with and clearly Bulgarians do want a strong man to protect them from the bad men. Former Communists seem to have more integrity these days, than the rampant Capitalists who have given us the gift of this long recession.

I like an alliance of rightist parties called The Blue Coalition. However, in the present situation, I wouldn't blame too much those Bulgarians who will vote for Borisov in order to remove former Communists from power. I don't share your anti-Capitalist feelings, and I don't understand what you mean by former Communists having "more integrity", but the fact is that we have been ruled by this party for 4 years and are now suffering Third World-like poverty plus infringement of our human and civil rights. This has happened every single time when former Communists have been in power, so I think even Borisov would be the lesser evil.

Maya, I thought your analysis was really interesting. Is there any evidence linking Borisov with dodgy practices, or is it just one of those things that 'everyone' knows? And what do you think now of the general election results - especially as you were a fan of the Blue Coalition?

Having a high position at a Bulgarian security company in the 1990s is, by itself, highly indicative of illicit activities and connections with the underground world. My friend who told me about his "business" relationships with Borisov's company is a person whom I trust fully. There are many other allegations about Borisov rolled around in public space - that before 1989 he pursued a career in the communist Secret Services but was turned away, that he was close to the underground boss Madjo etc. I haven't mentioned this things, because I am not aware of solid evidence backing any of them.
About the elections - I am very happy that the coalition ruling Bulgaria from 2005 to 2009 will step down from power. However, I do not harbour very high expectations for a government headed by Borisov. I only hope that at least he will be more careful in the future about what he says in public and will not amuse Europe too often.

Thanks for your article, quite useful piece of writing.