Self-respecting female bloggers are expected to write posts about their pregnancies before telling their husbands (http://jadmadi.net/2006/07/28/why-not-to-marry-a-blogger/, check No. 5).
However, I postponed making this matter public till the middle of the 3rd trimester. My pregnancy-and-maternity leave began on Saturday.
Of course most of the things I intended to do before "retiring" remained unfinished. I even left some glassware soaked, prepared for washing. Sorry, but I really couldn't do anything about it. I had calculated time to wash it, but on Friday I had to go home early to comfort the running nose of my son (my elder one, as I begin to think of him). Another piece of work I really had to finish (a blueprint for a new practical) was ready, or rather declared ready, in the very last moment. I presented it to my colleagues literally an hour before I left.
A note about my e-mail: Avoid using my office address - I'll visit that computer too rarely and the mail may stay unchecked for more than a month. I've opened a Gmail box and hope it will function properly. (Thanks to Programmer Craig who gave me the idea just in time.)
Posted by Maya M at 3:36 PM 9 comments:

Email ThisBlogThis!Share to TwitterShare to FacebookShare to Pinterest
Labels: personal

The first round of the presidential elections is over and preliminary results have been published: over 60% for the current President Georgi Parvanov, approximately 20% for Volen Siderov and approximately 10% for "my" candidate, Nedelcho Beronov.
There will be a ballotage next Sunday, because fewer than 50% of voters have taken part.
As you can guess, I am not happy with the results. Parvanov being challenged by Siderov for the presidency! I'd prefer to have for President a man picked randomly from a village pub.
Why are people such idiots?
Posted by Maya M at 3:17 PM 2 comments:

Tribute to a great woman 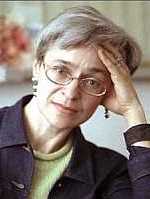 On Oct. 7, intrepid Russian journalist Anna Politkovskaya, 48, mother of two children, was assassinated in her home in Moscow.

The international community doesn't seem to care much. At http://news.bbc.co.uk/1/hi/world/europe/5416238.stm, you can read the too short and cold (to my opinion) BBC obituary. Bulgarian media covered her life and death in more detail. Below, I'm translating from the Netinfo page http://netinfo.bg/?tid=40&oid=946991. The photo is also from there; it was originally published by her newspaper "Novaya gazeta".

"Anna Politkovskaya, called "The victims' voice", is known worldwide mainly for her uncompromising publications about the war in Chechnya and North Caucasia and her criticism of President Vladimir Putin's policies... She received many death threats... Her colleagues from "Novaya gazeta" wrote that it was absolutely impossible for her to be intimidated or bribed into silence... Since 1999, she has visited many times war zones and refugee camps in Dagestan, Ingushetia and Chechnya. She wrote the documentary book Journey to Hell: A Chechen Diary... Her fiercely critical book isn't accessible to the Russian readers... She told the British Independent newspaper that on Sept. 1, 2004 she contacted Chechen rebels and persuaded thom to allow Aslan Mashadov... to go to Beslan and convince the terrorists to free the children they had taken as hostages. Then she went to Beslan to secure a pass for Mashadov... But during the flight she had a cup of tea and so was poisoned..."

Putin and his gang prefered to let all hostages die rather than allow any opposition figure help them and so get some credit. Anna Politkovskaya, on the contrary, could never accept the murder of innocents. Neither the innocent hostages nor the innocent Chechens. Such a person in Russia apparently is not entitled to a natural death.