Let's not take eyes off Iran 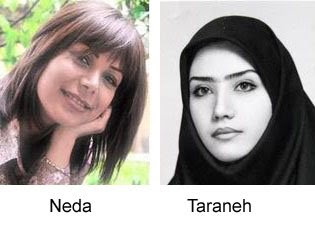 Left: photo of Neda Agha-Soltan, from Wikipedia. Right: photo of Taraneh Moussavi, from Azarmehr's blog.
Today, July 25, is global day for solidarity with the people of Iran (hattip: Azarmehr). I do not know what we can actually do to help them, but I am sure in one thing: we must not forget them, we must not let Iran step down from the news headlines. We must keep eyes on Iran, because when eyes and cameras are turned away, darkness falls and all imaginable and unimaginable outrages can be done under its cover.
The photos above show the faces of two beautiful young Iranian women who were recently murdered by the criminal Iranian regime. Neda Agha-Soltan was a 26-year-old philosophy student who went out to take part in the protests against the fake elections, although she wasn't a very political person. On June 20, she was shot by a sniper in the chest and died within minutes. She became a symbol of the protests after her death was recorded on amateur videos and uploaded in the Web by witnesses. Authorities did not allow Neda's parents to hold a proper funeral service for her and forced them to vacate their home.
Taraneh Moussavi (age unknown to me) was arrested when supporters of opposition candidate Mir Hussein Moussavi (apparently no relation to her) gathered at a mosque to hear him speak. Then, she went missing. At one moment, she was hospitalized unconscious with injuries indicating rape. On July 16, Taraneh's burned body was found in the outskirts of Tehran.
These are just two of the many fallen freedom-loving Iranians.
Posted by Maya M at 3:37 PM No comments:

After two weeks of large-scale protests, events in Iran took a sad if predictable turn. The regime performed a crackdown against the demonstrators, arrested hundreds if not thousands of them and set up special courts to try them. Nevertheless, sporadic small-scale protests still continue, and it seems that things will never be quite the same again.
Meanwhile, in China, "The CCP distracted people’s anger under its tyrannical rule by provoking racial hatred between Han Chinese (the dominant ethnic group in China - M.M.) and Uighur (a Muslim minority - M.M.). The CCP produced another Massacre in Urumqi immediately after it incited bloody incident against Uighur in Guangdong" (quote from Shao Jiang's blog). The regime has admitted to 184 victims, mostly Han allegedly killed by the rioting Uighurs. In Western media, these events are largely neglected or reported with poorly disguised sympathy to official China - see this AP report for example.
Below, I am copying almost all of Azarmehr's July 7 post China Protests:

"More than 150 Uighur ethnic people have been killed by Chinese riot guards... The pictures of the Chinese riot guards in their uniforms wielding their batons are similar to their colleagues in the Islamic Republic, the indiscriminate shooting at the crowds, the widespread arrests and terror are all similar to what we see in Iran, but thats not where the similarities end. The Chinese government like their friends in Ahmadienjad's junta fear information. They too blocked all access to mobile phones and the internet.
In theory the atheist Chinese Communist Party should be the furthest possible from a Shiite theocracy junta but the truth is, ideology is always just an excuse and a tool with totalitarian regimes. None of them believe in the ideologies with which they justify all human rights abuses they carry out. In practice only one thing matters to them, survival in power and in this they behave the same, help each other, stand united and support each other despite their ideological differences.
And in the same way the 'useful idiots' behave the same, they care not about people, they have their own hidden agendas. Are the Muslims in UK marching in support of their Chinese brothers? Are they gathering outside the Chinese embassy? Did 'stop the war' activists care about 10% of the Chechen population killed by the Russians? Did they care about Chechnya being flattened by massive Russian bombing? No of course not. They pick and choose their issues according to their agendas which has nothing to do with human rights or people suffering."
Posted by Maya M at 3:14 AM No comments: