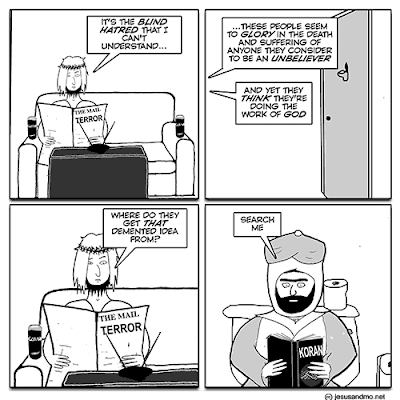 To begin blogging in 2018, a short bulletin of Islamist terror attacks in the West in 2017, compiled with the help of Wikipedia:

- March 22 in London, UK: A convert to Islam drove a car into pedestrians south of Westminster Bridge, fatally injuring four, then stabbed a policeman to death.

- April 4, Paris, France (not in the Wikipedia list): A French Muslim killed his neighbor, a 65-yr-old Jewish woman, by severely beating her and then throwing her out of the window. The perpetrator shouted "Allahu akbar" and "I killed the devil". French authorities and media tried to cover up this murder for as long as possible, categorizing it as a hate crime only 5 months later. I learned of it by chance, searching for something else in a Jewish media source. The victim, Sarah Halimi, happened to have the same family name as Ilan Halimi, another Parisian Jew savagely murdered by Muslims ten years before.

- May 22, Manchester, UK: A British Muslim, born to Libyan refugees, carried out a suicide bombing at a concert, killing 22. This act was particularly outrageous because the concert was of Ariana Grande, a singer with audience mostly of teenage girls. The youngest victim was 8. The cartoon above, of the "Jesus 'n' Mo" series, was published two days later. I copied it from Prof. Coyne's site.

- August 17-18, Barcelona, Spain: Five Spanish Muslims of Moroccan origin killed a total of 16 people in separate attacks by driving into pedestrians and stabbing.

As if this is not enough, some Westerners descend to the level of the Islamists, reacting to their attacks with equally ugly attacks on random, innocent Muslims. On January 29,  Alexandre Bissonnette (28) opened fire in a Quebec City mosque, killing 6. On June 19, Darren Osborne (47) drove a van into Muslims coming out of a London mosque after prayer, killing one. Again in London, on June 21, John Tomlin (25) poured acid on two Muslims, a female university student and her cousin, as they were sitting in their car.

Let's wish that 2018 will be better! I do not hold my breath, however.