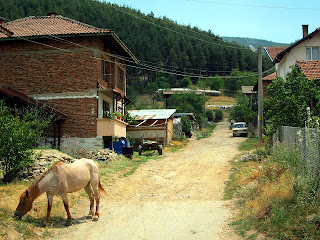 Photo from the village of Yurukovo, taken by blogger "The Guerrilla".

In my previous post, I listed the Israeli tourists killed in the July 18 Burgas bus bombing. This post is devoted to the only Bulgarian victim of this atrocity - the bus driver Mustafa Kyosov (36).
Mustafa was married, with an 11-year-old daughter who is in 5th grade. He was originally from the village of Yurukovo, in the mountrains of South-Western Bulgaria. Like the other people of this village, he belonged to our old-established Muslim minority. Some say he was an ethnic Turk but most sources about Yurukovo state that it is populated by Pomaks (Bulgarian Muslims).
As wrote "The Guerrilla" from whose blog I have copied the above photo, "not only is (Mustafa Kyosov) the only victim of this tragedy that has not been honoured, he is the faceless victim - we have not seen his image yet". This is quite true. While the Israelis were buried with honours, not one Bulgarian official attended Mustafa's funeral - only the Grand Mufti. And I haven't seen his photo published anywhere. We still do not know what he looked like.
Bulgarian news sites show pictures of distraught relations and friends, but I prefered one showing a typical view of Mustafa's home village. Some may find this reality beautiful and romantic while others would see in the same image appalling misery. The truth is that, while these villages are beautiful and comfortable for most of their residents (who have never become accustomed to modern accommodations), there are absolutely no jobs over there. Villagers are engaged in subsistence farming but it cannot really provide subsistence. For old people - maybe, but not for parents struggling to educate their children. Mustafa was the only breadwinner of the family, because his wife was unemployed. So he left his home and went to the other corner of the country, to the Black Sea coast, to find a job and support his family by honest work.
When a loved one dies in an accident or a crime, we can never forgive ourselves for not persuading him to be somewhere else at the fatal moment. Shortly before he was killed, Mustafa complained of home-sickness. In telephone conversations with his brother and uncle, he said he missed his family so much that sometimes wanted to tear apart his contract and return. Now they of course wish he did, and wish they had told him to follow his heart.
It is not yet known for sure who is behind the Burgas bombing but it seems safe to assume that it was Islamists' work. Did the masterminds feel any regrets that an innocent Muslim became "collateral damage"? I don't think so. When in 2006 Hezbollah shelling killed two Israeli Arab brothers aged 3 and 9, its leader called the children "martyrs for Palestine" and offered condolescences, case closed.
Mustafa Kyosov isn't the first Bulgarian driver killed by Islamist terrorists. On June 30, 2003, Krastyu Radkov (46) was shot on the West Bank by members of the Fatah Al-Aqsa Martyrs Brigades in violation of the declared ceasefire. Krastyu was driving a truck full of bottled water for workers of some construction site. The Al-Aqsa Martyrs said they had mistaken him for a Jewish settler. "Sorry, we thought he was a Jew" - this is the closest to apology you can hear from Islamists.
In the summer of 2004, Ivaylo Kepov (32) and Georgi Lazov (30), while driving a load of used cars in Iraq, were captured by Al-Zarqawi's men and then murdered. One of them was beheaded on video. I remember an argument at that time illustrating the pitiful human tendency to blame the victim (of which I have written elsewhere). The other person argued that, while the double kidnapping and murder was very regrettable, it was also understandable because Iraqis were "fighting occupation". I said that whatever one might think about killing of soldiers, these victims were just drivers bringing cars for sale - and whatever the locals were thinking of the war and occupation, they should have welcomed the cars, because everybody wants to own a car. My opponent stayed silent for a moment, then put forward a brilliant argument: "But these cars were second-hand!"
However, Mustafa Kyosov's murder was different, because while his unfortunate colleagues had travelled to the battlefields, he was killed in his own peaceful country. He became the first victim of modern global terror on Bulgarian land. This modest, hard-working family man should have lived unknown - instead, he left this world and entered History. Our pompous officials could at least make an effort and honour his funeral ceremony.
Posted by Maya M at 6:24 PM No comments: 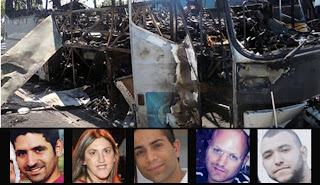 In the immediate aftermath of the July 18 Burgas bombing of a bus with Israeli tourists, I wrote that the victims were thought to be seven. This happened to be true: five Israelis, the Bulgarian bus driver and the perpetrator himself died in the carnage. Because it is not reasonable to count terrorist suicide murderers as victims of their own attacks, I should refuse the number to six. Yet they are still seven because the only female victim - Kochava Shriki (name pronounced "Koshava", age given 42 or 44 by different sources, from Rishon Lezion) was pregnant at last, after 4 years of fertility treatment.
Amir Menashe (28) was married, with a 10-month-old son. His friend Itzik Kolengi, or Kolangi (28) was married, with a 4-month-old daughter. Their wives were injured; happily, the babies were left at home. Amir and Itzik were from Petah Tikva, the same city where a decade ago  suicide bomber attacked an ice-cream parlour, apparently targeting young Jewish children and killing an 18-month-old girl and her grandmother.
Elior Priess, or Price (25) and Maor Harush (25) were friends from Akko (Acre).
They all were young, happy people who should have lived for many more years. They came to Bulgaria to enjoy the summer and the sea in peace. My country, while having many drawback, is known to be peaceful. I am sad that it betrayed its guests in such a tragic way.
Posted by Maya M at 4:34 PM 2 comments: