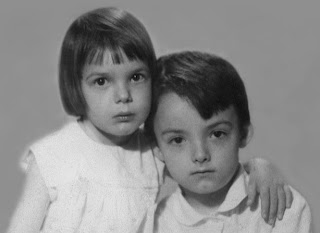 Why do otherwise sensible adults portray the difficult period of childhood as a Golden age of happiness?
Possibly because at that time we are together with people who are later separated from us forever.
I remember that, when my brother and I were children, the spring was a season of awaiting cherries. We both liked fruits, and they were practically absent from the spring market until the appearance of cherries in late May. My mother was always telling us that there would be cherries after May 24. This is a Bulgarian holiday which she had set as arbitrary threshold to add accuracy to our expectation.
Once, when we were having a full dish of cherries, my brother pulled out a particularly large and red one, called it Count Cherry after a character from Gianni Rodari's Adventures of the Little Onion and suggested we make a contest and use the cherry as a prize. He won the contest but then laughingly said that "Count Cherry" was rotten inside. Life always brings nasty surprises...
Like many other siblings, we had a quasi-language just for us two. This now extinct language included a special anagram for grapes, another favourite fruit.
What else did my brother like to eat? It is difficult to remember, because he hadn't the sin of gluttony and always cared for the others. He liked chocolate but never ate more than his fair share of it while I sometimes took from his share. There is a traditional Bulgarian dish, meat-and-eggplants hash (musaka sas sini domati). It is considered a refined dish because it is difficult to prepare, but actually few people like it. My mother thought he liked it, and he was duly eating it in order to make her happy. It took years for him to confess the truth.
Unlike him, I have always refused to eat things I do not like and never resisted the things I like. To me, no great painting or symphony can compare with the pleasure given by the tasty roasted meat, the sweet chocolate and ice-cream, the fresh fruits and other tasty foods.
I admit I have the sin of gluttony. But there may be more to it. Taste is our tool to evaluate the substances that will build and power our body. Hence, of all our senses it is the only one directly related to our self-perpetuation, to the machinery of being alive.
And now, when I enjoy some piece of tasty food between my tongue and palate, often a quick thought pierces my mind that my brother will never again taste anything.
Posted by Maya M at 12:30 AM 4 comments:

About the situation in Libya

Unfortunately, things are not developing well in Libya. Qaddafi's mercenaries have retaken a number of cities and are now threatening the very capital of the opposition, the valiant city of Benghazi. You can check libyafeb17.com and Wikipedia for the actual state on the battlefields.
I am outraged by the so-called international community. Indeed, France has recognized the opposition Council as legitimate government of Libya and, together with Britain, pressed for a no-fly zone. However, USA was reluctant, and Germany openly supported the Libyan dictator.
In fact, now may be too late for a no-fly zone. Different people are repeating this, including Saif al-Islam, the most disgusting offspring of Qaddafi. “It’s too late,” he said in an interview with EuroNews television, according to a transcript on its website. “In 48 hours, we will have finished our military operation. We are at the gates of Benghazi.” (Source: Business Week.) I wonder, why didn't all free people of the world press their governments to help the free people of Libya?
Azarmehr has written a very good post explaining why he backs military intervention against the Libyan regime, let me quote from it:
"If Gadaffi and his clan regain the control of the rest of Libya, there will be a massacre. If the world sits by and allows Gadaffi to bombard its own people in order to survive, it will send a devastating message to other dictatorships, use maximum brutality, do not give any concessions and you will survive."
Will he indeed be allowed to survive?
Posted by Maya M at 2:17 AM 2 comments:

This is The Song of the Rebels of (the town of) Panaguirishte, a popular song from the 1870s - the age of Bulgarian struggle for independence; lyrics by Ivan Vazov, the author of music is unknown. Below is a slightly compressed translation:

The fight is starting and hearts beat loud.
Our oppressors are coming now.
Courage, my loyal friends, show the world
We are no longer submissive herd!

Show we have broken the dirty chains
And we are free men, rather than slaves!
Let us begin the glorious fight
And God will help us with all His might. 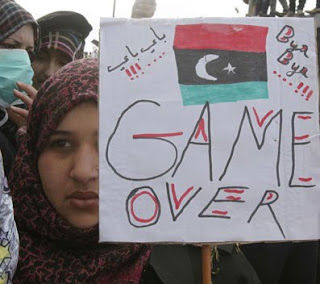 Top: An opposition supporter at a rally in Benghazi. Photo Asmaa Waguih/Reuters. 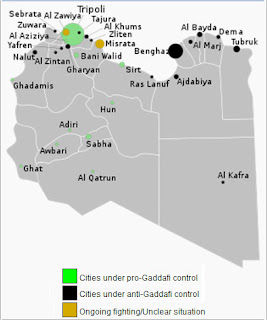 The political situation in Libya, after starting as classic tyrannical crackdown on the peacefully protesting citizens, escalated into civil war when some units of the Libyan army took the side of protesters, and some rebels apparently managed to arm themselves. The opposition fairly quickly established control over the eastern part of the country around the city of Benghazi and some western regions. At one time, the situation was unclear even in Tripoli -Qaddafi's stronghold. Now, he is attempting to retake the country but I think his efforts are doomed and can only bring more deaths and inflict more damage. (The southern regions are desert, so the green dots there are not as important as they seem.)

The regime continues to shoot ruthlessly unarmed people wherever it can and to abduct injured protesters from hospitals.

The Q-man said in a speech, "If I were president, I would have resigned, but I have no position to resign from." Indeed, he is not a President, not a Prime Minister, he occupies no normal position in a government - he is "just Leader of the revolution". More and more often, I am thinking of this "leader" as translated to German - "Fuehrer". Other people also make the same parallel. Let me quote Sky News: "Libya's ambassador to the United Nations, Abdurrahman Shalgham, a childhood friend of Gaddafi and former foreign minister who has turned against the regime, pleaded with the Security Council to act against the 'atrocities' by Gaddafi.
He spoke of... Nazi leader Adolf Hitler... Now Gaddafi was telling his people, 'either I rule over you or I kill you, destroy you,' the ambassador added. 'Please, the United Nations, save Libya...,' he said."

The world, however, has been too slow to react. The first concern of various countries, of course, was to evacuate their nationals from Libya. Now, several powers are discussing a no-fly zone to prevent Qaddafi from air attacks on Libyan citizens, but Russia ruled out this idea. Indeed, how could we expect Russia to be against killing protesters, after this has always been a tenet of its own policy?

I keep paying worried visits to Libyan blogs, notably those of Highlander and Khadija-Teri who are in Tripoli. Below, I am copying a small poem Khadija-Teri posted on Feb. 27:

"Day and night we are not safe in Tripoli

There have been helicopters today

More than ever before.

All of them are moving

I'm afraid to go outside to photograph them,

in case I turn into a target.

The dogs growl and bark.

The sun is setting now.

Tripoli is a nocturnal place.

we are not safe

Let me try to end this post in a more optimistic mood - quoting from the Happy Arab's Feb. 24 post:

"The unforgettable show this blog was promising to the readers in Libya has surpassed all expectations. In a spectacular outburst of madness Gaddafi ordered his air force and navy to bombard Libian cities. The death toll is running in thousands. Now it seems to be only a matter of time before the opposition storms Tripoli and dangles the Brother Leader from a lamp post. The opposition will have no other choice as attempting to try Gaddafi is risky of leading to hours long orations that would decimate the court and audience and overwhelm translators from Arabic assigned an impossible task... As the time to bid Shalom is approaching, let me praise the Brother Leader by saying that he was one of those rare individuals who could either bore the living daylights out of his audience or leave you rolling on the floor laughing for hours. There seemed to be little left between these two options."

Of course, for the unfortunate people under Qaddafi's rule the show has not been so funny. Let's hope for an end, the sooner the better.
Posted by Maya M at 4:16 AM 5 comments:

Why call "dominant" traits that are not?

(Readers without interest and background in biology or medicine are advised to skip this post.)
I am now preparing a lecture about Mendelian genetics and I included there the hereditary disorder achondroplasia as an example. All textbooks known to me describe it as a "dominant" condition, so I automatically put it under the headline "complete dominance". Then I started thinking on the subject and finally moved the slide below, to "incomplete dominance".
Why did I change my mind? Because, by definition, an allele is dominant when homozygous and heterozygous individuals having it are indistinguishable. However, in the case of achondroplasia, they are very much distinguishable: homozygous achondroplasia brings early death caused by "breathing failure due to constriction by a tiny chest cage and neurologic problems from hydrocephalus". So the surviving heterozygotes have a phenotype intermediate between that of the two homozygotes - the classical situation of incomplete dominance.
It is clear that, to determine whether we are dealing with complete or incomplete dominance, we must know the phenotype of both heterozygotes. However, in medical genetics, "dominant" is often used to designate any condition caused by a single allele, even if nobody has an idea what the mutant homozygotes would look like. In fact, medical geneticists have a working definition of "dominant" as "a pattern of inheritance in which an affected individual has one copy of a mutant allele and one normal allele". This is understandable in the context of past decades, when there was little chance to study the mutant homozygotes. However, with today's vast database of cases from all over the globe and the opportunity to create transgenic animal models, studying them has become quite realistic. So I think it is high time to sort out this matter.
Posted by Maya M at 2:51 AM No comments: