Why I hate Russia, part 2

Four years ago, I wrote a post titled Why I hate Russia, which to this day accumulates comments by various people wondering (politely or otherwise) how one can hate such a wonderful state. To clarify this, I am quoting below yesterday's report from the Telegraph's site, by Alec Luhn.

A Moscow court has left a 19-year-old Putin critic in pre-trial detention until September, as the Kremlin uses sweeping security measures to drown out dissent during the World Cup... Veterinary student Maria Dubovik... and five others who disparaged Vladimir Putin's government in private chats were jailed in March and face 10 years in prison for “organising an extremist group”. They include Anna Pavlikova and Vyacheslav Kryukov, who were 17 and 19 at the time of their arrest.
Four more defendants are under home arrest...

On Monday, a Moscow court sentenced Ukrainian journalist Roman Sushchenko, who was detained during a 2016 trip to Russia, to 12 years in prison for spying... Oleg Sentsov, a pro-Ukrainian film director who was given 20 years in an Arctic prison for allegedly planning to blow up a Lenin monument in Crimea, has been holding a hunger strike since May 14 to demand the release of Ukrainian political prisoners...


In the case of Ms Dubovik, she and several friends had begun discussing politics on the messenger app Telegram, which Russia has tried to ban, following a failed “revolution” of mostly young protesters called by self-exiled nationalist Vyacheslav Maltsev in November. They later began meeting in a McDonalds and going to opposition protests in Moscow.

A newcomer to the group, Alexander Konstantinov, rented an office for the would-be activists and wrote a political manifesto calling for Mr Putin to be tried by a “people's tribunal,” according to his testimony. He took some of them to shoot targets at a hunting reserve and learn to make Molotov cocktails at an abandoned building outside Moscow, although her lawyer said Ms Dubovik didn't go. Mr Konstantinov was in fact gathering evidence against the young people. Testimony revealed that a police investigator and at least one other man had also been secretly embedded in the group...

Opposition activist Ildar Dadin, who was released from prison last year after Amnesty International declared him a prisoner of conscience, was one of several dozen supporters not allowed into the courtroom on Tuesday.

He asked how European teams could participate in a World Cup “in a country that kills and imprisons innocent people”. 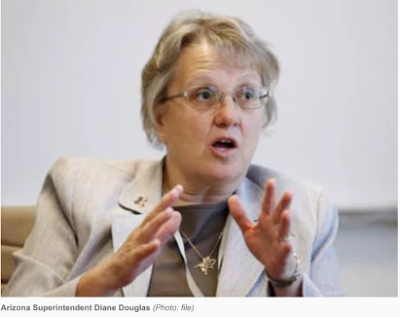 Diane Douglas (pictured), the Arizona Superintendent of Public Institutions, has successfully pushed new education standards that reduce teaching of evolution and describe it in weasel words in order to cast doubt on it. Details on Prof. Jerry Coyne's site, from where the photo was taken. The aim apparently is to pander to the sentiments and demands of religious folks who get their science from a Bronze Age source (the Genesis) and want to push the same insanity down children's throats, and the Constitution be damned. The change of standards is idiotic, and when one sees people systematically acting like idiots, he makes the appropriate conclusions. In other words, the anti-evolution crusade makes Americans a laughing stock of the world.

There are two possible explanations of Ms. Douglas' behavior: she is either an unscrupulous career climber who will call the black white if it suits her, or a religious fanatic with subnormal IQ. I'd vote for the latter. Couldn't they at least put a male in this position? I hate when women are chosen to do such book-burning dirty jobs. This feeds the stereotype that women are less inteligent than men, less able to do or understand science and easier to indoctrinate.
Posted by Maya M at 1:49 PM 2 comments: