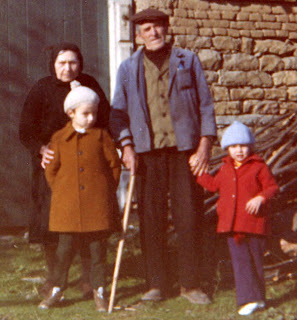 One of the most striking features of death is that it reverses age differences.

My brother was 2.5 years older than me. In childhood, this is a serious difference. My brother was always so much taller, stronger, more clever and informed than me, bigger than life. He was an authority, more human and understandable than the divine authority of our parents. I could entrust him things I would never tell my father or even mother. Throughout our early and teenage years, he introduced me to life, helped me discover the world we were living in.

After his death, our age difference slowly diminished. Last year, I reached his age, as if we were twins. Now, I am already 42 while he stays at age 41 forever.

I still cannot really believe it.

Unwelcome visit by Hamas to Bulgaria

(Bulgarian readers can read this post on my Bulgarian blog.)

Last month, three Palestinians, MP from the terrorist organization of Hamas which passes as political party in those far-away places, visited Bulgaria following an invitation by our Center for Middle East Studies. As dnes.dir.bg reported, "the Center's head Mohd Abuasi explained that the purpose of the visit was, after Bulgaria connected the military wing of the Lebanese faction of Hezbollah to the Burgas bombing, to show that our country has a balanced political attitude." In other words, because we have "too little" troubles with Hezbollah, let's invite a few terrorists from Hamas in order to perplex the world nicely.

Finally, the scandal that ensued forced the people from our National Security Agency to earn several cents of their inflated budged and to escort the dear guests to the airport prematurely.

What is actually this Center for Middle East Studies? From its site Bulgarian readers can understand that it is a non-government organization but I cannot see any mention of its funding sources. Random headlines from the site: Will Bulgaria after US and Israeli pressure accuse Hezbollah for the Bulgas bombing?, Palestinian resistance against occupation, Ethnic cleansing of Palestine - chapter 2, Dr. Mohd Abuasi: The terrorists' foreign passports and the Moroccan SIM card exclude Hezbollah. Do you need any more proof that this so-called "center for studies" is a nest of devoted supporters of Islamic fundamentalism and terrorism? I wonder what more is needed to happen - a new bomb or what - to make the security agents investigate this nest and its sponsors and so earn another cent of taxpayers' money.

Anyway, this is unlikely to happen soon because meanwhile protests caused our government to resign. While I was no fan of this government, I am unhappy that it was forced down after it resisted Moscow's pressure to build a nuclear power plant at Belene, and now people around the world are commenting that "this is the result of keeping a balanced budget and low debt".
Posted by Maya M at 6:23 AM No comments: