My former domain estimated at USD 1,700 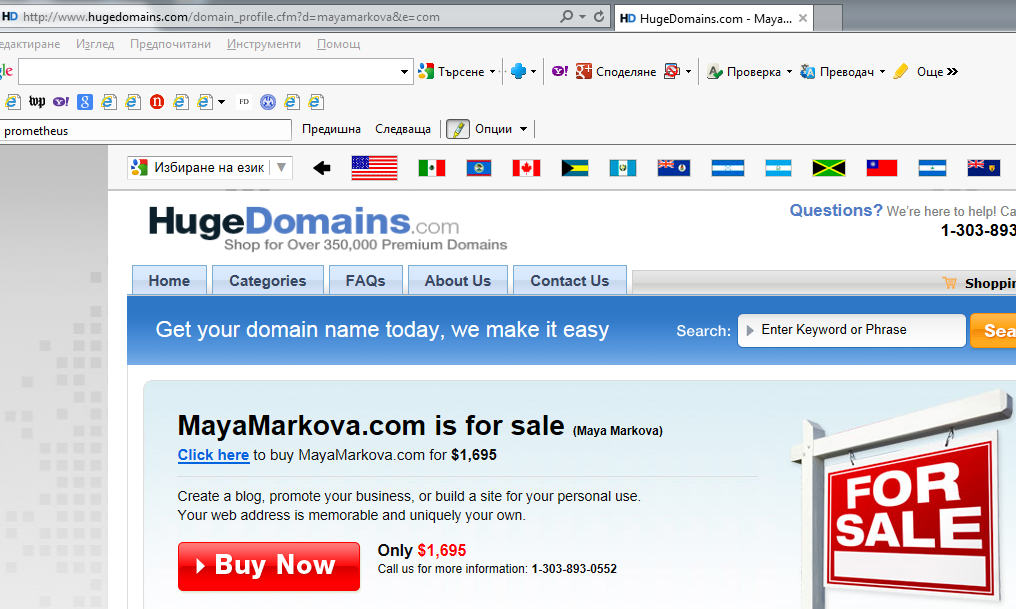 My personal site is currently at www.mayamarkov.com, but its original domain name was www.mayamarkova.com. I have already written how I lost this domain or, rather, how it was snatched from me by my former host-registrar company. They abused their position and told me that I either continue being their client or say goodbye to the domain. I preferred the second option. My opinion was that blackmailers should be said "no" and that, if the content of my site is of any use and value, readers will follow it anywhere.

These days, I visited my former domain to see what activity (if any) was going on there. To my surprise, it was offered for sale for $ 1,695. This is much more than my monthly salary. Actually, even in "Old European" and other prosperous countries there are many full-time workers with monthly income less than this.

Like most people, I often have doubts in what I am doing and achieving. I occasionally need something to bring up my self-esteem, and this was a good boost. Someone is hoping to make $ 1,700 from my abandoned domain! Whoever they are, I wish them good luck :-). The world isn't full of people named Maya Markova, and I don't think anyone else would want this domain.
Posted by Maya M at 1:20 PM No comments:

When a person dies, there are so many things to manage that relatives get up to their knees in paperwork. Some is normal - the certificate of death, the will etc. Some is extra. The saddest thing I remember is how my mother, about 20 minutes after she heard about my brother's sudden death, composed herself enough to tell my father that he urgently needs a visa to attend the funeral.

However, one thinks that the deceased at least has no more worries about paperwork.

Well, he does not do anything more himself, but in most cultures it is thought that something must be done for his soul, or it will have suboptimal fate. In Orthodox Christianity, the religion of my ancestors, it is believed that the soul roams in and close to this world for 40 days after death. On the 40th day, God decides where it will reside permanently: in Paradise or in Hell. On that very day, family members must hold a memorial service - as one priest wrote (unfortunately, I cannot find the quote right now), to try to influence God's decision and lean it to the wished direction.

After my brother's death, I did not care about any churches and services. And because it was known that my family was "that sort of people", a Christian friend of my father's reportedly ordered a service.

After my mother's death, however, I knew that friends and colleagues would like to gather together and remember her at the 40th day. And because there is secular funeral ceremony but no secular 40-day memorial service, I invited them to a church on Friday.

I could actually invite them to the cemetery and offer some food without calling a priest. However, I think that the cemetery is land of the dead and the living should avoid going there. Especially if they are elderly people that would just look at each other and wonder who the next would be. So I prefered a small church not far from my mother's home.

I have many times criticized the church and the clergy, and I surely will do it again in the future... so let me now state that I am thankful. I admit the church was there when I needed it, and although I have surely done some things wrong, nobody made me feel uncomfortable.

Update: A Christian friend of mine who had been guest at my mother's home wrote to me that she has taken care for my mother's name to be mentioned during the church services for 40 days. I was really moved by this.
Posted by Maya M at 3:03 PM 2 comments:

Two or three days ago, my 7-yr-old son, like his elder brother, had an existential insight. He asked,

"Because you are a person," I replied.