Drowned while seeking a better life 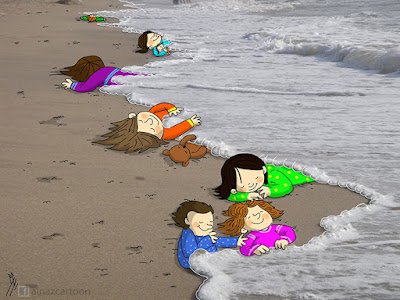 A month ago, on Sept. 2, three-year-old Syrian-Kurdish boy Alan (Aylan) Kurdi drowned together with his 5-yr-old brother Galip and their mother Rehana after the overcrowded inflatable boat by which they left Turkey and were trying to reach the Greek island of Kos capsized. The victims' bodies were washed ashore back on the Turkish beach. There, a reporter photographed Alan's body and the images shocked the world. I don't post any of them here, because I don't want to absolutely ruin the day of my few readers. Let me just mention that the beautiful little boy lying face down on the sand looked to be just sleeping, which inspired artist Mahnaz Yazdani to draw the above cartoon titled exactly so, Just Sleeping.

As a hopeless cynic, I mention in passing that the strong reaction to the photograph was largely due to the fact that Alan and Galip in appearance - face, haircut, clothes and all, were quite like native Western children, like my sons at that age. The BBC admits the same: "David Cameron echoed many reactions on Twitter when he said that, "as a father" he had been deeply moved. Nicole Itano oversees all creative work for Save the Children, including photography. She is also the mother of a one-year-old girl. "My first reaction was, my god, that could be my child, who has the same colour hair, the same chubby legs," she says... "He looks like he could be any of our children."" If the victim was a dark-skinned child, or a slightly older girl in a headscarf, I doubt that we would have been moved the same way.

I have written elsewhere about the unfortunate events that made millions of Syrians refugees. However, Alan's family was no longer fleeing the war and genocide in Syria. They had lived in Turkey for years - for almost all of his short life - in miserable yet safe conditions. So their story is part of the broader, universal narrative of Seeking a Better Life. Alan became known to the entire world, but there are many others who drown, literally or metaphorically, while seeking a better life, and you never hear of them, unless they happen to be someone you love.

By "seeking a better life", I don't mean the efforts to improve one's life but the drive to move to another place and solve all problems by finding a ready-made better life there. My opinion and experience is that, while trying to improve one's life is admirable even when not quite successful, the attempts to find a better life elsewhere are usually destructive. This "better life" is always said to exist in another, far-away place. This is a hint about its true nature: it is a mirage. And, similarly to physical mirages which are unreal but based on real objects and phenomena, this one is based on real places and facts. You'd better not believe that a better life is awaiting you in some Blessed Realm just because you possess photos, presents and other artifacts from this place. Even if you have visited it or have relatives living there - as Alan's father had - you'd better not believe that it is your dream incarnated. If you believe it, you sever your connection to the real world and get detached from reality. Only this can explain why an otherwise sensible person such as Alan's father could think that putting his most precious possession - his wife (who was unable to swim) and his young children - into an overloaded rubber dinghy supplied by unscrupulous modern pirates was a good idea. And even the lucky majority of better-life seekers who reach their destination safely find there not cloudless happiness but ordinary human life burdened with home-sickness and the strain of adaptation.

Seeking a Better Life is in the folklore of all nations. Remember Puss in Boots, Aladdin, Jack and the Beanstalk etc. The penniless hero finds a treasure lying in some cave without an owner, or a castle owned by some wicked being fully deserving to be killed and dispossessed. We read these tales to our young children, as if mixing poison into their breakfast milk. I wish to give examples of other folk tales, of heroes building better lives by work and ingenuity, creating prosperity where none existed before. However, there are too few such stories and they are obscure.

After the destruction of his family, Alan's father talked to some fellow refugees planning to embark on the perilous sea journey and dissuaded them. I am glad for them. Meanwhile, however, masses of thousands give their savings to the smugglers and sail the unfriendly sea to reach an unfriendly land. And I know that it is inevitable. Because to seek a better life is apparently ingrained in human nature.
Posted by Maya M at 6:24 AM 2 comments: