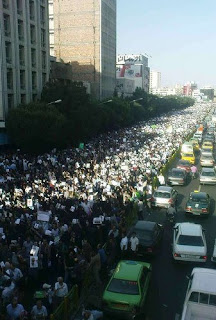 Photo: Protesters in Tehran on June 17 (copied from Sandmonkey's blog, original source unknown).
After a fake election, Iranian people have taken to the street to protest, to stand for their votes and probably for something much more fundamental. Many have already been murdered by the regime's security forces; still, ther is hope that a change for better will come against all odds.
Below, I am trying to translate a part of The Blind Shephards' Herd, by Valeri Stankov. It is one of the most popular modern Bulgarian poems and was written in the near past when Bulgaria was not that different from today's Iran.
"Blind shephards pasture us for many ages.
They push us upward, make us climb forever
Where only dry and sticky weeds await us
With roots pulled out of earth by stormy weather.
We hardly see grass even after rainfall,
Though we are promised green and juicy meadows.
And if one steps aside to leave this main goal,
Then lurking wolves attack him from the shadows.
The shephards' voices all are hoarse from shouting,
They curse us, call us miserable bastards.
And we keep climbing up this desert mountain
In dire hope to reach their promised pastures...
But day shall come to reckon with the shephards:
Like avalanche, we'll fall on them together,
For butcher's knife is ultimately better
Than being led by a blind man forever."
Posted by Maya M at 10:36 PM No comments:

A commenter recently asked me to "quote in English some information about the Rudnicar mission of Prudkin". I had written about Prudkin in my 2007 post Prison art.
Below, I am translating parts from the article "The collapsed building at the Alabin Street in Sofia had a dark secret related to Ruse", by Boyan Draganov, published in RuseNews on Nov. 13, 2006. Follow the link to the original page to see photos. Because I have never read anything about navigation in English, my translation is fairly illiterate; but as people say, better than nothing. 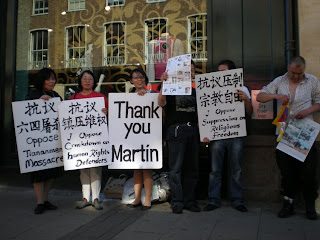 Martin Jahnke, about whom I have written in my previous post and earlier, is "a postdoctorate student who threw a shoe at Wen Jiabao, the Chinese prime minister, during a lecture at Cambridge University... (He) has been cleared of any offence. The District Judge said there was insufficient evidence to prove that Jahnke behaved in a way likely to cause harassment, alarm or distress.
The judge found Mr Jahnke not guilty following a two-day trial at Cambridge Magistrates' Court" (quote is from June 2 Telegraph report).
Bravo to the judge, apparently there is still justice in Europe.
Today, June 4 2009, is the 20th anniversary of the Tiananmen Square Massacre. May the victims rest in peace and may freedom soon come to China.
Posted by Maya M at 2:44 AM 1 comment:

The hidden cost of dictatorships