The problem with Islamophobic politicians

The Jan. 7 Islamist massacre in Paris was just another wake-up call for Europeans to protect their civilization against the onslaught of radical Islam.

Unfortunately, so far Europeans have little clue how to do this. It is clear that any effort to saveguard the traditional way of life, culture and values of Europe would require political action. It seems, however, that traditional politicians do not intend to do anything at all. They just keep telling citizens to accept Islam and (presumably) all problems and drawbacks that come together with it, and to pray that some relics of our civilization will survive against all odds.

On the other hand, there are openly Islamophobic parties and political movements of the type usually called "far-right". However, while they may occasionally do something useful, they are, to put it mildly, problematic. In Bulgaria, their main representative is Volen Siderov and his Ataka (Attack) party. Hate-mongering and propensity to violence are two of his distinguishing qualities. A third one is his Russophilia. A satirical weekly made a joke about him: "Is Volen Siderov a patriot? Yes, he is, but of a bigger (than Bulgaria) country." Siderov's last action was issuing a newsletter complaining that Ataka's media had not been allowed to properly report John Kerry's visit. Nothing unusual, you'd say... except that the letter addressed to Bulgarian media was, for mysterious reasons, written in Russian (link in Bulgarian). As you see, Siderov and his bunch of outcasts make Bulgarian political life colorful. However, if they collect more votes, they could become very dangerous.

In Germany, the Dresden-based group PEGIDA organizes rallies against the Islamization of Germany. So far so good, one would say. The same group also calls for reconciliation with Russia. This is hardly a coincidence. As Jeremy Bender wrote last December in his article Putin is infiltrating European politics with shocking effectiveness (published by the Business Insider), "Putin has become shockingly effective at influencing European politics through a host of far-right parties... The parties, located in the UK, France, Germany, Greece, Bulgaria, and Hungary, are increasingly popular - and staunchly against giving more power to the EU. Each of the parties has also fostered a closer relationship with Russia, and has protested against sanctions on Moscow following its annexation of Ukraine. The six parties linked to Russia are the UK's UK Independence Party (UKIP), France's National Front, Germany's National Democratic Party, Hungary's Jobbik, Greece's Golden Dawn, and Bulgaria's Attack... Russia expert John Schindler explains that while the Soviet Union backed communist-leaning parties to influence politics, Russia is now financing far-right parties in an attempt to steer European politics. The preferred outcome for Russia would be the dissolution of the EU and the end of a counterweight to Russian power." 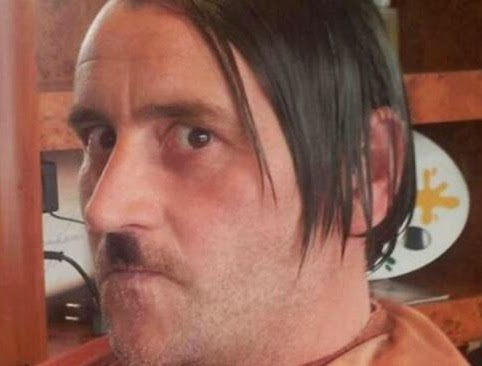 However, it wasn't the shameful support for the aggressor state Russia which forced PEGIDA's founder Lutz Bachmann to resign yesterday, but his selfie carefully staged to emulate Adolf Hitler (above; source: Wikimedia). This same nice guy also has a thick criminal record including burglaries, dealing cocaine and assault.

In 2012, during a discussion about Islamophobic mass murderer Anders Breivik on Rose-Anne Clermont's blog, commenter Gustav told me: "In case you share those (Islamophobic) views: Reconsider them and repent!" As you guess, I am nowhere near reconsidering my secular, pro-freedom views, let alone repenting for them. But, needless to say, I am also nowhere near individuals such as Bachmann or any other mini-Hitler. These psychopaths cannot help Europe and, as doctors say, are not good for our health.

I haven't heard from you lately, so I came looking. Wow! Lots of great thinking and writing lately. I wanted to discuss with you the word Islamophobe.

This morning a friend told me that here daughter was reading a French book, set in 2022 with France under Muslim law. She said "It is very controversial and the author is accused of Islamophobia." I find that work "accused" rather telling as thought the left and polite society has deemed it a crime. "Phobia" does not mean hate, it means fear. People who are afraid need compassion not accusation.

The other thing I find sadly ironic about the book it that is is set in the future. Was there ever a prophet we didn't try to stone to death?

Thank you!
You are quite correct that the left and (selectively) polite elites of Europe consider Islamophobia a crime. When you don't like someone's opinion and have no arguments to refute it, you resort to oppressing it by name-calling and sheer force.
That Islamophobic author had a point. Just see the recent events: Islamist savages killed a single Jordanian and Jordan immediately hanged two of theirs, while in France, 17 people were massacred and nobody intends to do anything about it. Americans must keep an eye on Europe, learn from our mistakes and grow a healthy dose of Islamophobia before it's too late.

I am reading your blog, but do not feel competent to distinguish between neoanalysts and oral theorists :-).
I am also reading with interest the discussion on Antigone's anger at Hour 25. To me, the royal ambitions of Antigone seem quite transparent. Before line 40, she says, "That’s what people say the noble Creon has announced to you and me — I mean to me..." She sees Creon as an inferior commoner and paranoically thinks that his decree, a desperate attempt to save the city, is targeting specifically her.

Don't worry about the "neoanalysts and oral theorists being Unitarians" I just thought it was a funny thing to see written. Not a sentence you'd come across too often.

I disagree with Ozob, I see no royal ambitions in Antigone. But, I must agree with you that she treats Creon as a commoner; because he is. Creon is not of royal blood. No other source calls him "king" he is always the regent. Plus if she desires to rule, burying her brother is not the way to do it. If she wanted to rule all she had to do is wait until the spiritual pollution (and plague) overran Thebes then denounce Creon as a bad king, defyer of Zeus' will, defiler of the corpses and the cause of the calamity. She could put her husband on the throne when Creon when to Delphi like Laius did. How knows maybe her uncle would have an accident on the way there too?

According to Wikipedia, Creon is a descendant of Cadmus. So, even if not among the first 10 in the line to the throne, he can hardly be considered a commoner. He says of his nephews and himself, "I, being their nearest next of kin, took over the throne". So Antigone's attitude seems quite intriquing to me. If Creon's claim to leadership was based solely on his relation to Jocasta, then Antigone's misogyny could explain her contempt.
Reigning queens did not (to my knowledge) exist in ancient Greece, and were regarded as highly anomalous in its mythological counterpart. Thebes was, from Athenian viewpoint, an anomalous place, but not to such a degree to allow a woman to rule. So Antigone cannot rule openly, she can only defy the ruler until she is executed or his rule is disintegrated, or both.
The other opportunity you mentioned - to marry Haemon, to wait until he becomes king and to pull strings from behind - could be used by another person but not by Antigone. Despite the slavish love of Haemon to her, such a plan would require some patience, cunning and hypocrisy, qualities totally absent in Antigone. Moreover, she absolutely rejects Haemon. She says herself who she wants to lay with, and this is her brother.

"...If she desires to rule, burying her brother is not the way to do it."
You presume that Antigone thinks rationally. Don't forget, however, that she is a religious fundamentalist and, as is usual with fundamentalists, not too intelligent. The mental processes of such people cannot be understood by attempting to identify with them and ascribing rational thoughts and motives to them; we'd better observe their deeds, listen to their words and try to draw conclusions.
In the beginning of the play, Antigone says numerous times that she is miserable and she doesn't mind dying. The reader may even suspect that she just wishes to get out of her misery and all her claimed sisterly love and religious piety is just an excuse to bring about her own death in a more glorious way than simple suicide.
When, however, Creon orders her execution, Antigone changes her tune. It seems now that she wants to live after all. More importantly, her former confidence that she is following the will of gods is gone. Why is she doubting that the gods are at her side? Because they are letting her perish. So maybe she from the beginning expected the gods to come to her rescue like the 6th Ranger Battalion - because she had followed their will. So, from her point of view, burying her brother and so fulfilling the will of gods may have been a "rational" way to earthly success.

I am perhaps not precise to say that Antigone wishes to rule. She wishes her father's bloodline to rule, and her current trouble is that only she (and her sister Ismene, who doesn't count) have survived from this bloodline. In the world of Sophocles, Laodamas and Thersander are never born. We do not know whether the instutition of epiclerate existed in Sophocles' Thebes, and if it did, whether Antigone would qualify for it. Even if it does, however, Antigone does not think of it, at least not until her last lament.