We would think that, if there is such a thing as a dignified social event, it would be the commemoration of murder victims.

Unfortunately, we are sometimes wrong about that.

On Jan. 11, about 1,5 millions of people and 40 world leaders marched in Paris at a unity rally to honor the victims of the Jan. 7 massacre.

The leader of the free world Barack Obama, wasn't there. Neither was any high-ranking member of his administration. The USA were represented merely by their ambassador in Paris.

This absence was more than compensated by the bizarre presence of representatives of states notorious for cracking down on free speech. Among them was the Saudi foreign minister, two days after imprisoned Saudi blogger Raif Badawi was publicly flogged for thoughts he had expressed in his blog.

This still wasn't the worst, however.

Among the 17 human beings murdered by Islamists on Jan. 7, there were four Jews targeted at a kosher supermarket. They were Yoav Hattab (21), Yohan Cohen (20), Philippe Braham (45) and Francois-Michel Saada (63). 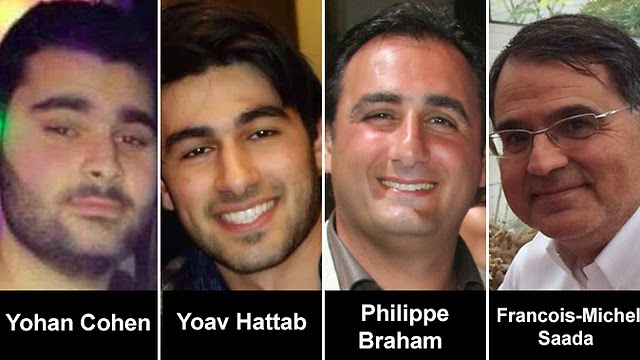 The photos are copied from Ynet News. You can read obituaries of all Jan. 7 victims e.g. at BBC's site.

Some of the killed Charlie Hebdo contributors were Jews. However, these four men were different. They did not insult anybody's religion. They were not combatants in the great battle for free speech. They were murdered simply because they were Jews. For an Islamist, any and every event is a good occasion to attack Jews; and this must be kept in mind by every Muslim and non-Muslim who tries to feel well about Islam or to have a "balanced" opinion about the Mideast conflict. In France, this  hate-motivated murder of four Jews doesn't come out of nowhere. Before it, there was the 2006 torture to death of Ilan Halimi, and then the 2012 murder of three Jewish children and a rabbi in Toulouse. In all cases, the victims were killed solely for being Jews (the definition of genocide), and the perpetrators were Muslims acting in the name of Islam.

Given that four of the Jan. 7, 2015 victims were Jews killed for being Jews, anyone of the meanest understanding would expect to see the representative of Israel at most honorable position at the Jan. 11 unity march, next to the French President Hollande. However, the French leaders had another opinion. The story is described in many news sources; I'll use first Israeli TV: Hollande didn't want Netanyahu at Paris march, by the Times of Israel and AFP:

Netanyahu initially accepted Paris’s wishes and on Saturday cited security concerns to explain why he would not attend the event, which was organized in a show of solidarity and defiance after terrorist attacks in the French capital, which claimed 17 lives. Among the victims were four Jews at a kosher supermarket and a Muslim police officer.

When Netanyahu’s office told the Elysee Palace that he would be coming after all, France responded by highlighting that it was extending an invitation to Palestinian Authority President Mahmoud Abbas, according to the report. The French government also announced a planned meeting between Hollande and Abbas Saturday night..."

Now, some additional details from Pushy in Paris: Israelis up in arms over PM's posturing, by Laurent Lozano (AFP, via Yahoo! News):


"Images of Israel's premier elbowing his way to the front row of world leaders in Paris sparked both embarrassment and amusement back home - providing rich pickings for opponents in the upcoming election.

A welter of headlines and columns were prompted by Prime Minister Benjamin Netanyahu's pushing to the front of Sunday's march in Paris and unsuccessfully trying to jump to the head of a queue waiting for a bus...


After joining others at Hollande's Elysee Palace, Netanyahu tried to edge his way into the first bus taking officials to the starting point of the march but failed.

Once he was at the march, Netanyahu deftly manoeuvred his way from the second row to the first..."

To sum up: French president Hollande didn't want Netanyahu on the march, because his presence would be "divisive" - read: offensive to Palestinians and other Muslims who want Jews dead, or at least are thought so. When Netanyahu insisted to attend, Hollande rushed to invite Abbas, for ballance, though Abbas had nothing to do there - he is not committed to free speech, neither were there any Palestinians murdered on Jan. 7. The French also tried to keep Netanyahu in the "back of the bus", forcing him to push his way forward. And after the march, but still before the victims were even laid to rest, the problem was shifted and was no longer the Islamist murderers but the "pushy" Jew. This shameful incident clearly shows how deep is Jew-hatred rooted in Western psyche. As for some Israelis finding Netanyahu's behavior unsuitable - I am sure that when Rosa Parks refused to give her seat to a white man, she was also labeled "pushy" not only by a significant proportion of whites but also by quite a few blacks.


Another story casting the shadow of indignity over the tragedy was related to the slain Charlie Hebdo's editor-in-chief Stephane Charbonnier (47, known as "Charb").

Immediately after his death, ex-Muslim politician Jeannette Bougrab (41) came out as his girlfriend for a period of 3 years and talked of him and their relationship in a series of emotional interviews. She said: "I always knew he was going to die like Theo van Gogh. I begged him to leave France but he wouldn't. My companion is dead because he drew in a newspaper... He never had children because he knew he was going to die. He lived without fear, but he knew he would die... He died standing. He defended secularism. He defended the spirit of Voltaire. He, in fact, was really the fruit of this ideal of the Republic that we've almost forgotten. He died, executed with his comrades, as he would say... I haven't lost Charlie Hebdo. I've lost a loved one. I am here, not as a former government minister, but as a woman who has lost her man, who has been murdered by barbarians. I admired him before I fell in love with him and I loved him because of the way he was, because he was brave."

However, Charbonnier's brother and parents were not happy with Ms. Bougrab. The brother Laurent Charbonnier stated that the family "formally denies any committed relationship between Charb and Jeanette Bougrab". He also insisted that Ms. Bougrab stays away from the funeral and stops talking to media: "We do not want her to express herself in the manner in which she has done. We ask for respect for our family's mourning." Jeannette Bougrab publicly complained of their request and attitude but complied to it and did not attend the funeral. She also released a photo showing that she and Charb had been at least close friends, if not something more: 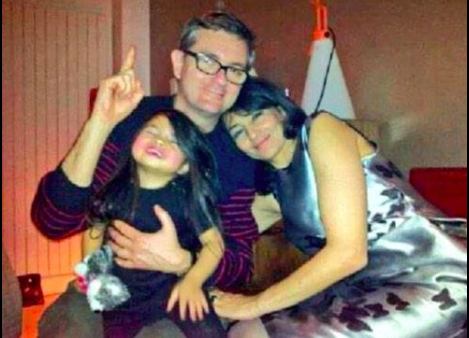 I understand why Charb had tried to be discrete about his relationship. He had said, "I am not afraid of retaliation. I have no kids, no wife, no car, no credit. It perhaps sounds a bit pompous, but I prefer to die standing than living on my knees." In a similar way, Bulgarian writer Georgi Stoev separated himself from his girlfriend and their daughter because he knew he would be killed for his writings about organized crime.

When a loved one dies, his relatives are overwhelmed by the loss and wish a quiet, nice funeral (what an oxymoron!). They don't want there anyone who could "make a scene". So I can, to some degree, put myself in the shoes of Charb's natal family. But I utterly disapprove what they did. It was a funeral after all, they could show a little generosity and let all who wished to bid farewell! The wife of former French President Mitterrand must have been deeply hurt by him having a mistress and a daughter out of wedlock, yet invited them to the funeral! Why couldn't the Charbonniers get over their feelings? As some commented, it was bitter irony that the relations of a man who died for freedom of expression didn't want Ms. Bougrab to "express herself". Also, Charb's family may have done exactly what his murderers wanted, that is, staying silenced about his murder and silencing Jeannette Bougrab. Islamists definitely don't want people to express themselves the way Ms. Bougrab did. In their wish to avoid bad publicity, the Charbonniers generated more of it than Ms. Bougrab ever could if she had been allowed to speak and to attend the funeral. And finally, while her saying that they had "killed him a second time" by not letting her attend was a great exaggeration, it is true that the public image of a man with a girlfriend is better than that of a loner.

Anyway, although Jeannette Bougrab was silenced at the end, it was her words that portrayed Charb not only as a man with a cause but also as a human being able to love and worthy to be loved.
Posted by Maya M at 11:18 AM

Good commentary on a story I hadn't heard.

Re Obama: he refused to identify the attack on the Kosher deli as an attack on Jews -- it was just random. Two of his spokesmen tried to maintain thischarade of not mentioning that Jews were targeted. Obama's request to Congress for authorization of military action against ISIS outlines who has suffered at ISIS' hands, but carefully omits Jews. It's not accidental. And it's incriminating.

I've also read reports that Obama treats Netanyahu with animosity and periodically issues veiled threats against Israel.
Why on Earth did Americans vote for Obama the second time? Didn't they see who he is? Or maybe he has some great domestic achievements that I have missed and that in the eyes of US voters outweigh his foreign disasters?

Thinking of the Chapel Hill murders, I suppose that you understand my position: I prefer to consider as possible hate crimes even those that may not have such motives, rather than risk being mistaken for an Obama-like hypocrite!