In a recent post, I wrote about the sad fate of Crimean Tatars who remained in their land.

What about those who fled Russian oppression? I am copying below from Quartz' report Photos: One of Ukraine's most nationalistic cities has become a refuge for nearly 2,000 Muslims, by Misha Friedman: 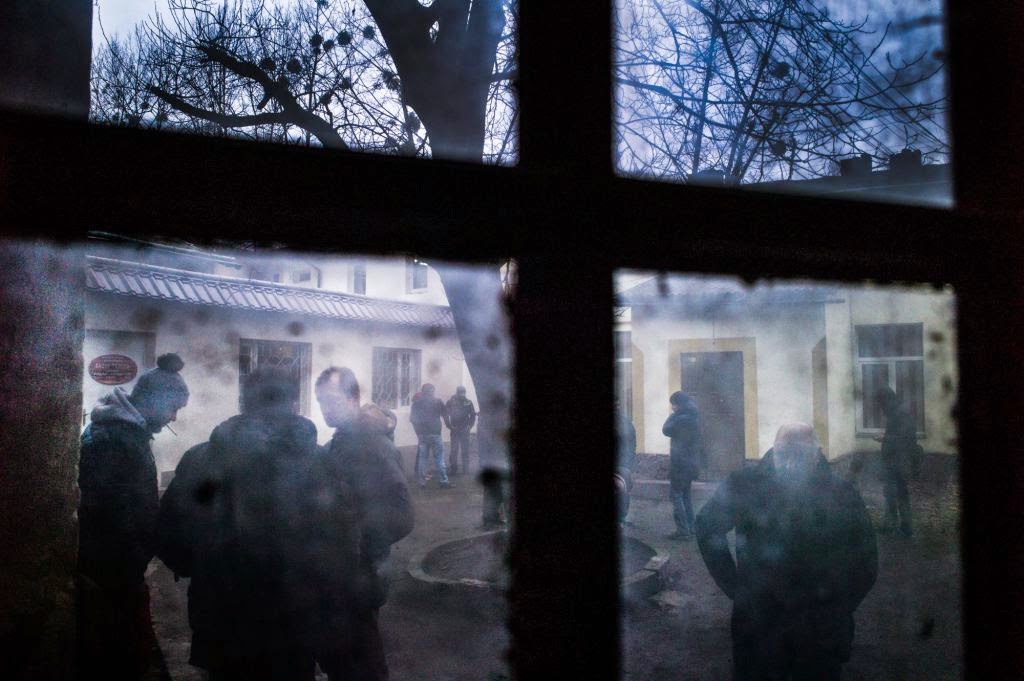 People congregate after Friday prayers. There is no mosque, so they use a space rented by another Muslim diaspora, the Dagestanis. 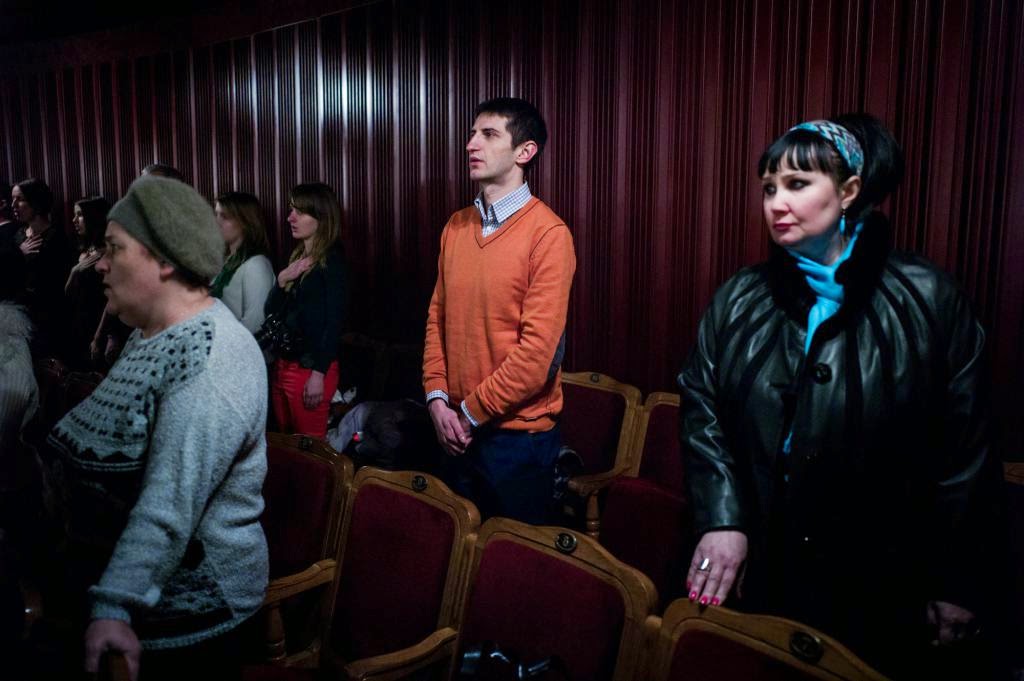 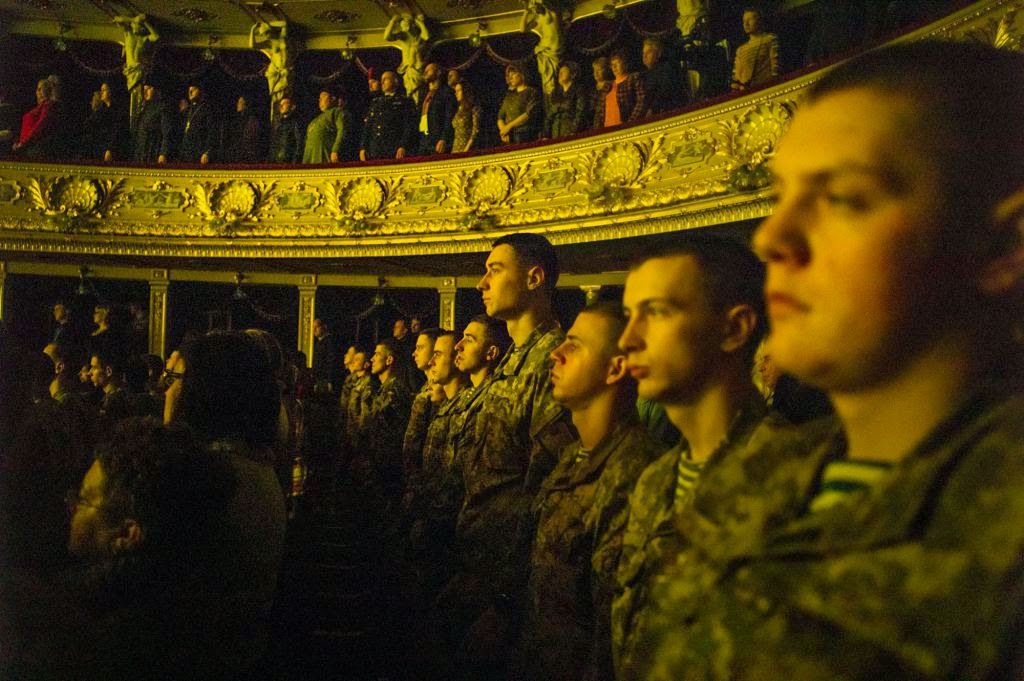 New army recruits sing the national anthem at a ceremony on Unity Day. 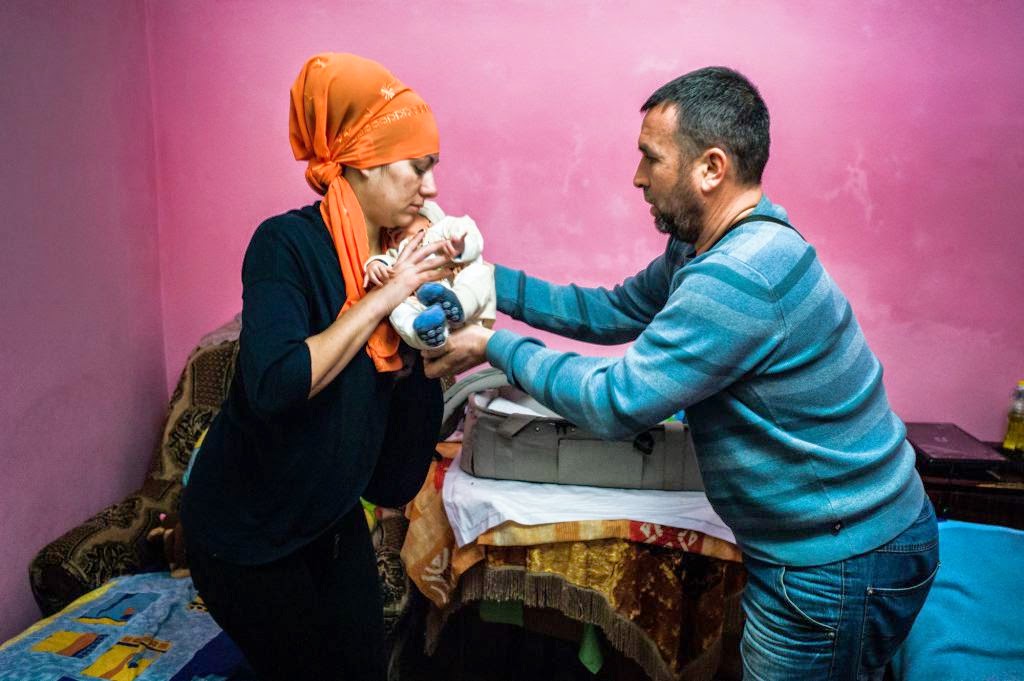 Muslim naming ceremony for a two-week-old baby, born to a Tatar family in Lviv. The man, named Suleiman, is the baby's "godfather". He was a truck driver in Crimea. 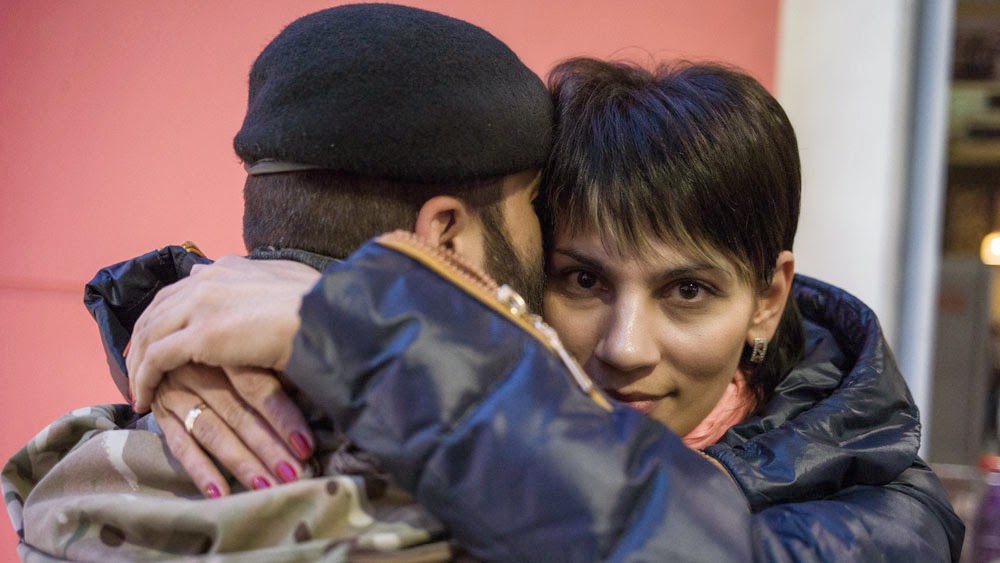 Elmaz and her husband Timur Barotov, refugees from Crimea who now live in Lviv.

"Among the million-plus Ukrainians displaced by the fighting in the east are thousands of Jews and Muslims. Life is complicated for both groups. In a previous photo-essay, Misha Friedman documented the Jews of Dnipropetrovsk; in this one, he highlights the Crimean Tatars, a Muslim community who, like the Jews, have a long history of persecution in the region. Thousands have fled Crimea since Russia annexed it last year, and many have gone to the western Ukrainian city of Lviv.

It’s an unlikely destination. While the city has a long and cosmopolitan history, reflected in its picturesque mix of architecture, its recent past has been less friendly. When Germany invaded in 1941, the city was in Polish hands, and its ethnic Ukrainian residents—at the time outnumbered heavily by Poles and Jews—enthusiastically helped the Nazi forces round up and kill Jews, and later took part in massacres of Poles. Since then the city has been a bastion of Ukrainian nationalism.

Yet one thing unites the Muslim Crimean Tatars and the Orthodox Christian Ukrainians: their enmity towards Russia. And so, for now at least, the Tatars are welcome in Lviv. By the time Friedman visited in January, some 1,700 had made it their home, and more were arriving...

Like the displaced Jews in Dnipropetrovsk, the Tatars who have moved to Lviv have had to find new professions. “I didn’t meet anybody who does what he did back home,” Friedman says.

Lviv wears its nationalism on its sleeve. The people killed during the Euromaidan protests in Kyiv in 2014, which led to the ouster of Ukraine’s pro-Russian president, Viktor Yanukovych, are martyrs here as much as in the capital.

Unity Day, a government holiday on Jan. 22, is taken especially seriously in Lviv. It marks the unification of eastern and western Ukraine in 1919 and their brief existence as an independent country before the USSR and Poland took over and redivided the country in 1920. Members of the Crimean Tatar community join in the ceremonies.

In Dnipropetrovsk, Friedman had encountered the family of Asher Cherkassky, an Orthodox Jew who fights in one of Ukraine’s volunteer battalions against the pro-Russian separatists. In Lviv, he met Timur Barotov (link in Ukrainian), a former Ukrainian naval officer who joined a volunteer battalion to fight the Russian forces in Crimea. When Russia annexed the peninsula, some members of the Ukrainian military there switched their allegiances to Moscow. Barotov left instead, and has become a minor celebrity, playing a part in a film about Ukrainian history (link in Ukrainian). Barotov’s wife Elmaz (pictured with him at the top of this story) is Crimean Tatar; he himself is part Ukrainian, part Tajik."

While it is good that the author is reporting these events and the photos are beautiful, I am annoyed by his anti-Ukrainian bias. He says that "ethnic Ukrainian residents... enthusiastically helped the Nazi forces round up and kill Jews, and later took part in massacres of Poles." I hate such sweeping generalizations (a similar generalization - that Crimean Tatars allegedly collaborated with the Nazis - was Stalin's lame excuse for deporting them en masse, killing many thousands in the process). Some ethnic Ukrainians did help the Nazis enthusiastically, others presumably followed orders, the majority were bystanders, and a few helped and saved Jews, some paying for this with their lives. Nevertheless, all are painted with the same brush and are found guilty just because they were Ukrainians.

The author links to an outrageous article in the Independent from March 9, 2014, by Patrick Cockburn. It is titled To see what Ukraine's future may be, just look at Lviv's shameful past and tells about killings and persecution of Jews and Poles in Lviv between 1941 and 1944. The implication is that Ukrainians are hopeless genocidal blood-suckers who are best kept under the Russian boot. To understand why this text is beyond disgusting and the Independent should be ashamed of it, just imagine an analogy: a respectable British paper publishes on Sept. 12, 2001 a detailed report of the Wounded Knee Massacre as showing the true and unchanging US psyche, with a lot of crocodile tears for the victims of 1890 and not a word about those killed the previous day.

Misha Friedman also implies that honoring the people killed during the Euromaidan protests as martyrs proves that "Lviv wears its nationalism on its sleeve." This is true only if you use "nationalism" as a synonym of "patriotism". The Euromaidan protesters are chauvinists and neo-Nazis only in the distorted Neverland of Putin's propaganda and in the minds of those gullible enough to believe it. In reality, as Luke Harding wrote in the Guardian on March 13, 2014 quoting Kiev's protesters: Ukraine uprising was no neo-Nazi power grab.

Let me borrow from this article: "On 20 February, as revolution engulfed the centre of Kiev, Joseph Schilling, a 61-year-old builder from western Ukraine, went to the frontline to join the protests against President Viktor Yanukovych's government... The place where Schilling died is now festooned with flowers... Here too are images of other members of the "Heavenly Hundred" – the name given to the 102 protesters who have perished near the Maidan, Kiev's central Independence Square. The Kremlin describes last month's uprising in next-door Ukraine as an illegitimate fascist coup. It says dark rightwing forces have taken over the government, forcing Moscow to "protect" Ukraine's ethnic Russian minority... Schilling, however, was an unlikely fascist... He and his wife Anna had lived in Italy... Moreover, he was Jewish...According to those who took part in it, the uprising was a broad-based grassroots movement, launched by people fed up with Yanukovych and involving all sections of society. Some demonstrators were indeed nationalists. Others were liberals, socialists and libertarians... Its victims were a diverse bunch. The first was an ethnic Armenian; another Russian. The man who began this revolution is Mustafa Nayem, a well-known Ukrainian journalist... investigative reporter born in Afghanistan."

Mustafa Nayem, spelled also Nayyem, has a page in Wikipedia.

So my suggestion is: Let's stick to humanism, nationalistic or otherwise, and when we see a poor European nation under attack, let's not dig for sins of the first half of the 20th century in order to justify today's brutal and unprovoked aggression. Or, if someone really wishes to write about what happened in the first half of the 20th century, I'd advise him to mention the Holodomor as well. Let's ask why Russia got away with starving to death millions of Ukrainians in 1932-33, and is now being allowed to kill Ukrainians again.
Posted by Maya M at 1:29 PM