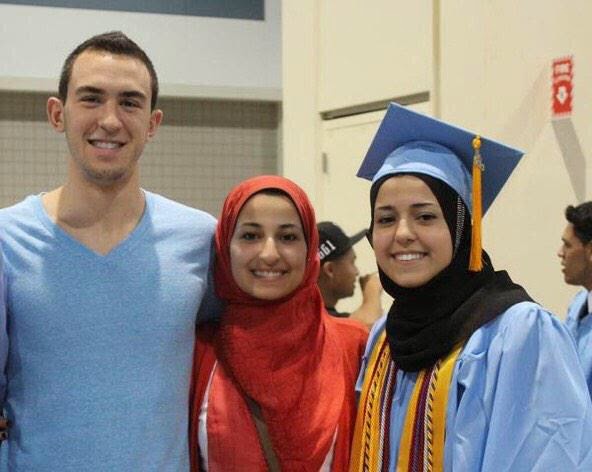 On Feb. 10, three Muslim American university students were shot dead in their condominium in Chapel Hill, North Carolina. They were Deah Barakat (23), his newlywed wife Yusor Abu-Salha (21) and her sister Razan Abu-Salha (19). The alleged murderer Craig Stephen Hicks (46) gave himself in shortly after the shooting. He was their neighbor and also a student (?!).

There has been a discussion of the motive(s) of the crime ever since.

On one hand, as the Washington Post reports, "Craig Stephen Hicks was feared by his neighbors. He obsessed over parking spaces and always appeared angry... His ex-wife, Cynthia Hurley, who divorced Hicks about 17 years ago, said his favorite film was Falling Down, in which a disgruntled and unemployed defense industry worker played by Michael Douglas goes on a shooting rampage... He thought it was hilarious... "He kind of made everyone feel uncomfortable and unsafe,” resident Samantha Maness told...“He was very angry anytime I saw him.” Maness describes Hicks as particularly fixated on parking and noise. He was known for having unfamiliar cars towed and had confronted Maness for being too loud. Last year, she said, residents convened a meeting to discuss Hicks’s behavior, but nothing came of it."

The Wall Street Journal adds information provided by a local tow truck driver: "Christopher Lafreniere said his company had a contract for towing in the Finley Forest neighborhood where the alleged shooter, Craig Stephen Hicks, and two of the three victims lived. Mr. Lafreniere said the company was called “every day, or at least several times a week” for more than a year by Mr. Hicks with requests to tow cars that Mr. Hicks said weren’t parked in the proper spaces. In one incident, Mr. Hicks had a gun, Mr. Lafreniere said. “This guy towed an obscene amount of cars,” Mr. Lafreniere said. “It got to the point where we stopped answering his calls.”... Chapel Hill police have said the Tuesday shootings were prompted by a parking dispute between Mr. Hicks and the married couple, his closest neighbors... “The news is saying, ‘hate crime, hate crime,’ but then I found out it was that guy and I thought, ‘Hmm, it actually might have been a parking issue,’ ” Mr. Lafreniere said. “He was all about towing.”"


On the other hand, however, Hicks expressed "anti-theist" views on his Facebook page, condemning Islam and other religions, and his victims were Muslims. Moreover, the young women wore headscarves, a marker known to be disliked by North American and European societies. Their father is sure that the murder was driven by hate - quote from the CNN report: "When his son-in-law lived alone in the condominium complex, the family never had any problems. But once his daughter moved in, wearing a headscarf that clearly identified her as Muslim, trouble started, he said. "My daughter, Yusor, honest to God, told us on more than two occasions that this man came knocking at the door and fighting about everything with a gun on his belt, more than twice," her father said. "She told us, 'Daddy, I think he hates us for who we are and how we look.'" Learning from the police how his two daughters and son-in-law were killed has only made him more convinced."

My thoughts: First, I strongly condemn this outrageous triple murder, and I acknowledge that I share Hicks' militant atheistic and Islamophobic views.

From what I have read about the case, and also from the photos of Hicks - which I don't want to copy here, but you can find them in every news report - I think that he is a psychopath with an unfortunate mess in his head as well as in his life, and that it was only a matter of time and circumstances before he externalized his misery in a murderous attack against someone guilty of being happier than him. So Hicks was a walking bomb just waiting to be discharged.

However, this sort of people seek and concoct inside their sick minds some bizarre justifications of their crimes. In Hicks' case, I think that, besides the parking issue, the hate against Muslims is more than likely to have played a role; and if the youths had not been Muslims, or at least not so apparently, his rage would explode at some other moment and against someone else. We may never know the truth, because the needed information must be provided by the murderer himself; and if he had been motivated by hate, he would prefer not to admit it in order to avoid being charged with a hate crime (as if a triple murder isn't grave enough). However, if we claim that this was just a parking issue and the visible Muslim affiliation of the victims played no role, we are burying our heads in the sand, and this isn't good for anybody.

Five years ago, I tried to explain to a Muslim newcomer to the USA why it is better not to wear a headscarf in the West. Humans are not very nice creatures, and I knew that such attacks will happen from time to time. And, unfortunately, given the overall situation, I expect them to increase.
Posted by Maya M at 5:08 AM

There's evidence that the killer hated all religions. What makes no sense to me is why it is considered a more serious offense to murder someone because one hates their religion, race, etc. than for equally worthless "reasons." And murder is the ultimate act of hate, regardless of specific motivation.

I also note that all sorts of people want this to be a "hate" crime. They want this for political reasons, to use as a weapon. And if it can be defined as a hate crime against the entire group, they all get to be vctims. People revel in the idea of being a victim as it adds to their sense of self-righteousness.

I also feel uneasy about the entire hate crime legislature, with its underlying ideas of thought crime (what you are thinking matters for how you'll be punished for the same crime) and victim-grading (those killed because of e.g. their skin color are considered more valuable than those killed to be robbed).

At the same time, however, I suspect a hate element every time when the perpetrator and victim belong to different groups.
In the particular case of Muslims, I expect hate crimes to increase. And, while some of them will be disputable (like Chapel Hill), others will be crystal-clear, and it will be impossible to deny the nature of the crime.

Some Muslims are of course happy to assume the position of victims, but I think those who conform to the Islamic dress code while living in the West must first do some soul-searching themselves.
I of course do NOT condone attacking a woman for wearing a headscarf, but why do dress codes exist as unofficial norms? Because people do not get away with violating them!
And the headscarf is of course much worse than other dress code violations - it is a declaration of Islamic fundamentalism in a society suffering from this fundamentalism (did you hear about the latest attacks in Denmark?).

Frankly, I don't understand why people immigrate to a country they like so little that they are not ready to conform to the local dress code. I would not go to a country where I'll have to cover my head. Or if I do, I'll be ready to cover my head. "When in Rome..."
Someone must tell Muslims that Westerners do not like headscarves, and that putting headscarves on your daughter's head while living in the West is child abuse!