Russia to USA: You are beating the Negroes!


Copying from the Aug. 15 report Ferguson riots play big in Russia, by Karoun Demirjian, in the Washington Post:

"MOSCOW — In the United States, days of rioting in Ferguson, Mo. over the police shooting of African American teenager Michael Brown are a troubling reminder of how deeply racial tensions still divide the country.

In Russia, they provide an opportunity, in this era of sanctions and new Cold War-style sentiments, to accuse America of being a giant hypocrite.

In the United States, “which has positioned itself as a ‘bastion of human rights’ and is actively engaged in 'export of democracy' on a systematic basis, serious violations of basic human rights and barbaric practices thrive,” Russia’s Foreign Ministry said Friday, in a special commentary on the situation in Ferguson. “We would like to advise American partners to pay more attention to restoring order in their own country, before imposing their dubious experience on other states.”...

The United States' problems with racism have long been a favored topic for Russians, dating back to the heyday of the Soviet Union.

During the 1920s and 1930s, Soviet leaders pointed to the existence of Jim Crow laws in the United States as a way of asserting the moral superiority of the Soviet Union. Racism, which was illegal in the Soviet Union, was deemed a systematic byproduct of capitalism.

In the civil rights era, especially, the Soviet Union used American anti-black racism as fodder to challenge the United States’ claims to leadership of the “free world.”

Soviet and modern-day Russia alike have had their own problems with racism as well, of course – to the point where Russia was recently rated by one publication as one of the worst countries for people of color to travel in..."


A commenter to the report asks, "If Russia is so great at treating its people of colors, then why don't all the blacks in the USA immigrate to Russia."


The linked report rates Russia as second worst country for black people to travel. It states:

"Black visitors will also have to be extra careful when they venture outside of Moscow into the rest of Russia. In a chilling warning, the Russia expert of  New Republic, Julie Ioffe, said, “There’s quite a bit of violence against people considered to be Black” in Russia... Ioffe warned that nowhere in Russia is safe for a person of color to visit, outside of Moscow’s city center...

Ioffe was asked by a Black college student whether it is safe for an African-American to study in Russia. Here’s her answer: “Hmmmm, that’s a tough one. I think that, for the most part, you’d be okay — if you consider people glaring at you and cracking racist jokes okay. (Russians are, er, not the most tolerant bunch.) There’s quite a bit of violence against people considered to be black, which includes, in the Russian mind, people from Central Asia and the Caucasus. My advice is go, but stick to the city center and try to go to a bigger city like Moscow. (St. Pete is crawling with skinheads.) Be extra, extra careful and make sure the American Embassy knows you’re there. They have a special unit to deal with threats to American citizens, so you should report anything that happens immediately.”

I would ask the black college student in question, what is wrong with him, to even consider going to Russia voluntarily? If safe life is too boring for him, he'd better engage in some extreme sport.

Some beg to disagree with Ms. Ioffe that at least Moscow is relatively safe for blacks. The New York Times report quoted below, Moscow Journal; African Students' Harsh Lesson: Racism Is Astir in Russia, by Seth Mydans, is based on personal experiences:

"Mr. Diboi Kath, 23, is an exchange student from Cameroon, and like many other African college students in Russia he says he feels threatened by racist thugs every time he leaves his dormitory.

He has been abused, beaten and even shot during his five years at People's Friendship University, where about one-third of the students come from developing countries...

Racist attacks on foreigners here -- Asians, Arabs and especially blacks -- have been a continuing problem whose victims have included diplomats and American Embassy Marine guards as well as students.

Last year, ambassadors from 37 African nations appealed to the Foreign Ministry for protection for their citizens. Human rights groups have documented widespread harassment, often with the compliance or support of the police.

Racist attitudes lie deep within the Russian psyche and are growing even worse now, said Aleksandr Brod, director of the Moscow Human Rights Bureau, a private group that monitors discrimination. The driving force, he said, is the proliferation of white-supremacist skinhead groups, which enjoy widespread support and are fueled by nationalist political groups and publications...

''All this Nazi ideology gives rise to hatred of all non-Russians,'' Mr. Brod said. ''And so, many people even think skinheads are not bandits and hooligans but Russian patriots who are fighting for the purity of Russian society.''

As a result, he said, ''literally every week in Moscow and in other regions of Russia there are attacks by skinheads on members of minorities,'' some of which, he said, are fatal.

A suspicious late-night fire that took at least 42 lives at Friendship University three weeks ago has intensified fears among minority students here. A number of them -- particularly Chinese students -- have cut short their studies and headed home, fellow students said...

An attack can happen anywhere, Mr. Diboi Kath said, but some times and places are worse than others. ''Like the Metro Green Line,'' he said. ''If you want to die, you go there at 6 o'clock.''

National holidays and major sports events -- with their drunkenness and heightened passions -- are times to stay home, many students said. Mr. Diboi Kath said that although he loved sports, he had never been to a soccer stadium or a basketball game in Moscow. ''It's like a dream for me,'' he said. ''The cinema is like a dream. If you go to the cinema or to a stadium, it means you want to die.''


The report is old (from 2003), but I don't think anything has changed to better. We received a proof earlier this month. The image and quote below are from The Independent's Aug. 17 report Barack Obama's 53rd birthday marked with racist laser projection and banner in Moscow, by Kashmira Gander: 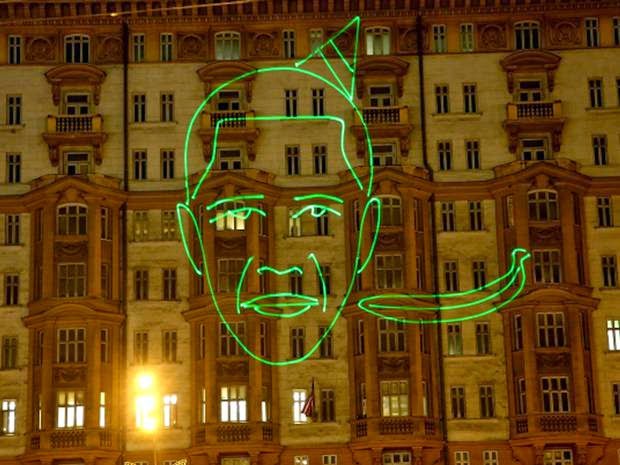 "As icy relations between the West and Russia show little sign of improving, protesters in Moscow marked Barack Obama's birthday by unleashing racist imagery in the city, comparing the US President to a monkey.

A YouTube video of the crude projection entitled “Obama “swallows” banana in Moscow” ashows “Obama Happy Birthday” cast in green laser across the US Embassy on Monday evening.

The words are then followed by an outline of the US President wearing a striped party hat, as a banana enters his mouth.

The Moscow Student Initiative - which describes itself as “an art group, a circle of common interests, activists, students, patriots,”- took responsibility for the stunt on VK, a social network similar to Facebook which is popular in Russia."

Not that I am a fan of Barack Obama. I must admit that, hearing about the racist jokes in Moscow, I even gloated. To me, he will be remembered as one of the worst US Presidents in recent history; and I think that now he is reaping what he has sown, by his politics to be good and appeasing to all bad governments and groups worldwide and seriously hope that they would love America and him in return. If you appease bad people, they only despise you and attack you, interpreting your irrational goodwill as weakness.

At the end, let me return to one sentence from the Washington Post report: "The United States' problems with racism have long been a favored topic for Russians, dating back to the heyday of the Soviet Union." Back in those days, whenever one would point the advantages of the USA over the Soviet Union, Communists would reply, "Don't talk about this, you in the USA are beating the Negroes!" This "argument" was repeated so consistently that not only in Russia but throughout the Soviet block, "Why are you beating the Negroes?" became an idiom for an irrelevant and dishonest counter-accusation. Of course, today it is going out of fashion together with the very word "Negroes", due to political correctness. But we still remember it. And the nice people in Moscow will not let us forget it any time soon.

(Disclaimer: My own country also has an awful record of racism. But at least we are not as hypocritical as the Russians.)