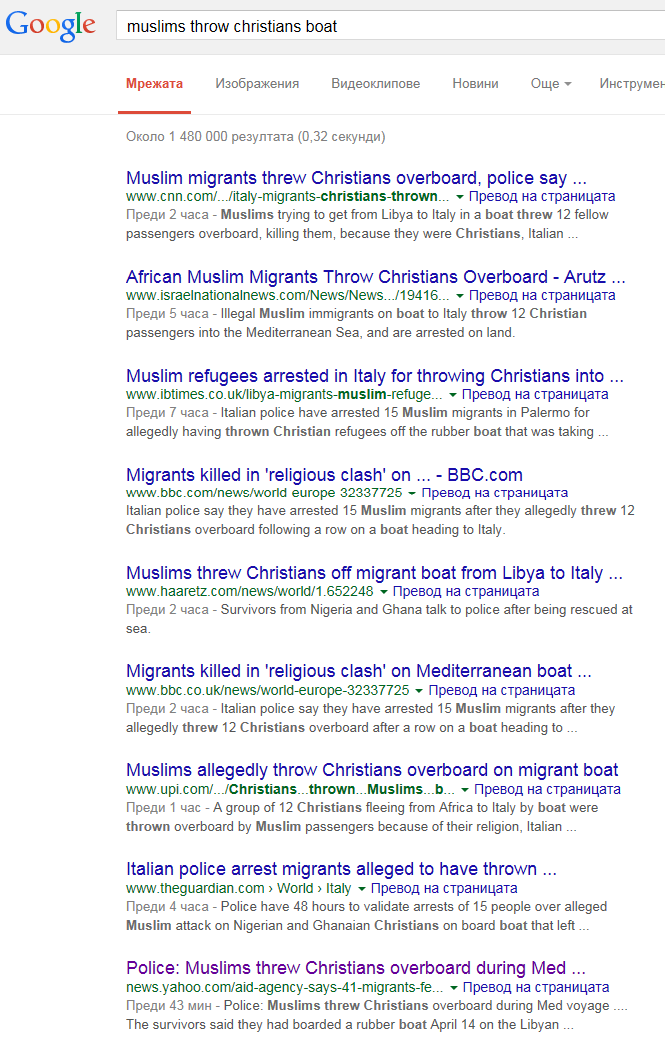 The rush of Africans to reach the Promised Land of Europe at any risk often leads to tragedies in the Mediterranean Sea. News of drowned immigrants-to-be are becoming depressingly familiar, but today's reports stand out because the tragedy was a result of an outrageous crime: When 15 Muslims (from  the Ivory Coast, Senegal, Mali and Guinea Bissau) learned that their fellow passengers on the boat were Christians (from Nigeria and Ghana), they started throwing the Christians overboard. Twelve people were drowned, the rest successfully resisted by forming a "human chain".

This lynching illustrates what the Islamists want to do with all non-Muslims: namely, to throw us into the sea. Palestinians have been trying to throw the Israeli Jews into the sea for decades; and clueless native Europeans keep supporting them, oblivious to the increasingly real danger of being thrown into the sea themselves. Thinking of the drowned Nigerians Christians, I suppose that some of them may have tried to emigrate exactly for this reason - to escape violent persecution by Muslims.

I found the first report of the mass murder by browsing Yahoo! News. It was titled Police: Muslims threw Christians overboard during Med voyage. I decided to write about this, but had a lot of more urgent work. When I finally got to blogging, this report was buried under more recent ones, on various subjects. Only one of them covered the same event - by AFP, titled Migrants 'throw fellow passengers overboard' in religious row.

I mentioned that the title didn't mention the fact that the alleged murderers were Muslims and their victims were Christians. An analogous title about the Holocaust would be, Six millions killed in Europe over religious differences. I decided to dig into this and launched a Google search using muslims throw christians boat as keywords. The image above shows two merged screenshots. The top search results are:

Do you see a pattern? While US and Israeli media have duly included in their titles the religious affiliation of alleged perpetrators and victims, as must be done when reporting a suspected religiously motivated hate crime, European sources have tried to muddy the waters by composing politically correct titles about "migrants". One has to scroll 4 more results to reach the first European title mentioning "Muslims" - Updated: Italian police say Muslim migrants threw Christians ... (Independent). It seems that the European elites will indeed return to their senses only when "migrants" grab them and throw them into the sea!
Posted by Maya M at 3:05 PM

America's "National Public Radio" headlined this story as "conflict between Christians and Muslims turns bloody." I was expecting to hear how some street confrontation between two groups got out of hand. But the subsequent report detailed how some Muslims unilaterally murdered some Christians just for being "not-Muslim", and the remaining Christians formed a human chain to peacefullythwart the continuing attempts of the Muslims to murder them.

Never mind the Muslims who committed the murders, why did the other Muslims stand by and watch? I think it is because that's just what Muslims do when other Muslims commit evil acts.

Thank you for the comment! I was going to answer its last part, but now I think this matter is so important that deserves a separate post.