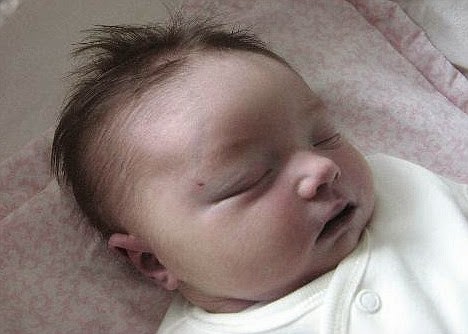 A victim of the quest to bring down c-section rate at all costs: Five years ago, Alexandra Campbell died in Britain at age 3 days as a result of being delivered by forceps instead of Caesarean section. Source: Daily Mail.

"In 1985, Marsden Wagner, then head of Maternal and Child health in the European Regional Office of the WHO, convened a conference that declared that the optimal C-section rate was 10-15%. Wagner and colleagues simply made that up, thereby elevated their strongly held ideological conviction, unmoored from science of any kind, into policy.

In 2009, the WHO was forced to acknowledge that there is no optimal C-section rate and that there had never been any scientific evidence of any kind to support an optimal rate.


"Although the WHO has recommended since 1985 that the rate not exceed 10-15 per cent, there is no empirical evidence for an optimum percentage … the optimum rate is unknown …"

For 24 years the World Health Organization touted a C-section target that was an utter fabrication, created to suit the prejudices of its creators, without any evidence to support it.

Pretty embarrassing, no? Apparently not, since the WHO has just done it again... In the wake of exposure of 1985 optimal C-section rate as a fabrication, the WHO has done it again, albeit this time with greater sophistication. In 1985, Wagner and colleagues merely conjured the “optimal” rate out of thin air; this time they’ve disingenuously, and without any scientific justification, applied the optimal rate for low and middle income countries to high income countries."

You can read the new WHO document here. It states that the rate of Caesarean sections should not exceed 10%.

I recommend you to read the entire post by Dr. Amy to see her arguments why this is ideology and not science. I'll add another argument of my own: To be science rather than ideology, recommendations about a medical procedure such as c-section should state not percentages but indications and contraindications. So the WHO should state that, based on outcome of c-sections vs. vaginal birth (references should be cited here - WHO cites none), it recommends c-section in cases of narrow pelvis, large fetal head, breech presentation... (list other indications) and does not recommend c-section in cases of severely compromised maternal status...  (list other contraindications).

If percentages are recommended, it is ideology and not science because, even if the rate looks good, there is no guarantee that it is "filled" with the correct patients. A mother and her baby may have every single indication for Caesarean section but if doctors are told that decreasing c-section rates is more important than lives of mothers and babies (which is the essence of the WHO statement), it is likely that the mother will be forced to have a vaginal birth, with all the risks. The quest for vaginal birth at all costs has already taken many lives, not even mentioning the disabled survivors. An example is the beautiful baby whose photo is shown above, a baby who will never grow up. Quoting from the Daily Mail:

"With her long eyelashes and black hair, Alexandra was, says her mother Beatrix, ‘the most beautiful thing I could imagine’. The newborn, who weighed 9lb 4oz, had been conceived through IVF after five years of trying (which had involved both parents undergoing surgery) and was a much longed-for child. So her arrival last June should have heralded a time of joy. Yet her parents are grieving for their daughter, who died when she was just three days old...

Alexandra died as a result of severe injury to her spinal cord inflicted during a forceps delivery that went wrong - ten hours after her parents had repeatedly begged the obstetric team to deliver the baby by Caesarean.

The couple were later told by their doctors at the Royal Infirmary Edinburgh’s Simpson Centre for Reproductive Health that Alexandra had been ‘unlucky, very unlucky’. However, they believe she was the victim of medical arrogance and a determination to reduce the rising Caesarean rate.


As a result, thousands of babies every year are being delivered using forceps - yet this instrument is deemed so risky many obstetricians no longer use it. Unfortunately, few women are told of the potential dangers... Experts are particularly concerned about a type known as Kielland’s forceps, which were used to deliver Alexandra...Yet at least 31,500 babies a year are delivered by forceps - that’s one in 20. Some hospitals continue to use Keilland’s forceps; at the Royal Infirmary, where Alexandra was born, there are 170 such deliveries a year...

But the Campbells knew none of this when Beatrix was two weeks past her due date and went to the hospital to have the labour induced. She met all the criteria for a ‘difficult case’ - though no one told her that. ‘As well as being past my due date, the baby was lying sideways and was large considering I am a slight 5ft 2in,’ she says.

Thirty hours after induction started, exhausted and barely dilated, Beatrix told the midwife she wanted a Caesarean. As the hospital later admitted, this would have saved Alexandra, but the request was refused...


The consultant obstetrician was in the [operating] theatre for a few moments, then left to go to another patient. She left a junior doctor with a Libyan medical degree in his second year of training to carry out his first unsupervised delivery using Kielland’s forceps. ‘He didn’t say a word: he just inserted the instrument and started rotating the baby. I was petrified,’ says Beatrix. As the hospital later acknowledged must have happened, the forceps turned Alexandra’s head, but not her body, injuring her spinal cord...

Eight months on, they [Beatrix and her husband Craig] are hoping there will be an independent investigation into Alexandra’s death. They have begun their own investigation into forceps, discovering that deaths or serious injury are far from rare. ‘We were horrified to discover this is a frequent occurrence that no one seems to be monitoring,’ says Beatrix. ‘Craig has found local newspaper reports of ten examples of babies dying or being damaged during forceps delivery, with the coroners’ reports in many cases saying that a Caesarean should have been performed earlier.’

Maureen Treadwell, of the Birth Trauma Association, believes some hospitals are becoming dangerously focused on holding down the rate of Caesareans. This is because they cost twice as much as natural deliveries, and the National Institute for Health and Clinical Excellence (NICE) has also recommended that hospitals keep the Caesarean rate at 15 per cent (the national average is 25 per cent). ‘There seems to be a belief that telling the truth about risks of forceps and the relative safety of Caesarean might push up the rates of expensive surgery,’ says Treadwell, a member of NICE’s Intrapartum Care Guideline committee."

Don't you think that national health authorities, as well as WHO, should be worried by these predictable and preventable poor birth outcomes and should work on bringing their rates down? Instead, they are obsessed with bringing c-section rates down, as if this medical procedure is something intrinsically bad, like car accidents or crime.

Let me share a little personal experience: Both my births have been vaginal. Doctors had said unflattering things about my connective tissues when I was 12, but I never received any diagnosis, so I can say that there were no indications for c-section before my first birth. It produced severe lacerations and was followed by episodes of incontinence. This was not considered an indication to have a c-section next time, and my second vaginal birth produced more of the same. I think I am likely to resort to reconstructive surgery at some later period in my life. I wouldn't blame my doctors, or our health care system in general. On the contrary, the doctors were great, and the system worked quite well in my case. Bulgaria is a poor country, many life-saving treatments are not covered by the National Health Care Fund (even for children), so the Fund simply cannot afford sending mothers to c-section because of some lacerations. What troubles me is that the decrease in my quality of life that resulted from vaginal birth (and which is a very common complication of this birth) hasn't been indicated in any medical record. I think that wealthier individuals and countries could consider c-section not only when safety requires it, but also to preserve the mother's quality of life.

When I am engaged in a discussion in medical matters (e.g. about vaccines), my opponents often say, "You want us to read only articles supporting your thesis!" I reply, "No, I'd advise you to read documents of the best medical authorities we have - CDC, national physicians' associations, WHO." Now, I think I shouldn't refer people to the WHO. People there have a wrong ideology. They don't care about babies and mothers. Whom do they care for? Probably stray dogs.
Posted by Maya M at 11:35 AM

Thank you for this! I had a c-section for exactly what you discussed for my second child and have not been happier! And I still have a bladder.

Thank you for the comment! I am glad for you and your children!

Allow me to also attack the "home birth" woo. I know a couple who are quite well off and have excellent health insurance who opted for home birth. Hence their perfectly health son died because he became entangled in his umbilical cord and was strangled. But at least it was "natural."

Better yet, they've even been able to get a nice publication for the CV from the experience.

How sad!
True homebirth was unknown in my country, but now it is making its way, because of gullible people who think that every trend in the West cannot help being smart and must be emulated. I've written about it some time ago:
http://mayas-corner.blogspot.com/2012/11/first-homebirth-victim-in-bulgaria.html